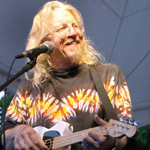 For over forty years Peter Madcat Ruth has been widely acknowledged as one of the finest blues harp players on the globe. He’s brought his mastery of just about every style of blues, along with intriguing forays into folk, rock, jazz (he’s toured with jazz legend, Dave Brubeck) and even classical music, (he’s won an Emmy for his contribution to Pulitzer Prize winning Ann Arbor composer, Bill Bolcom’s Songs of Innocence) to destinations all over the US and to many other parts of the world. Now, he’s carrying a bit of that world home, bringing one of the musicians he’s worked with overseas back to his adopted hometown of Ann Arbor. When Big Joe Manfra, one of Brazil’s finest blues guitar players, joins Madcat at the Ark on Thursday, September 27, it will be the start of a new phase of a musical friendship that is well into its second decade.
Madcat met Manfra in 1998 when Ruth was on tour in Brazil with another of his longtime musical partners, Shari Kane. Manfra and Madcat hit it off immediately and, “the next year Manfra invited me back” says Madcat. “Since then we have done ten tours of Brazil and have played over eighty shows together including three appearances on The Jô Soares TV show which is Brazil’s equivalent of The Tonight Show, or The Letterman Show.”

In 2004 Madcat recorded a CD, “Madcat Live in Rio” with Manfra and his blues band. The recording features the hard rockin’ electric Chicago blues that has long been a hallmark of Madcat’s style, and Manfra and his band are more than equal to the challenge of jamming with the master. Manfra’s blistering electric guitar riffs perfectly complement Madcat’s high voltage harp solos on all the blues tracks, and he and his band also smoothly follow Madcat when he goes off-the-beaten-blues-path on tunes such as the Beatles’ Ticket to Ride, Desmond/Brubeck’s jazz classic, Take Five, or the folky 500 Miles (which they play, appropriately enough, in 5/4 time) and even the R&B classic, Hit the Road Jack.

Manfra will be coming to the US without his band, but Madcat has invited a superb rhythm section to join them for their gigs together. Sitting in on bass and drums will be another pair of Madcat’s collaborators, Mark Schrock and Mike Shimmin of Maxwell Street.
“Manfra LOVES Blues” says Madcat. “When we toured around together in Brazil, the music sound-track in the van was strictly blues.  I’d be seeing beautiful beaches and palm trees out the window of the van but the sound-track was Muddy Waters, Howlin’ Wolf, John Lee Hooker, etc.”