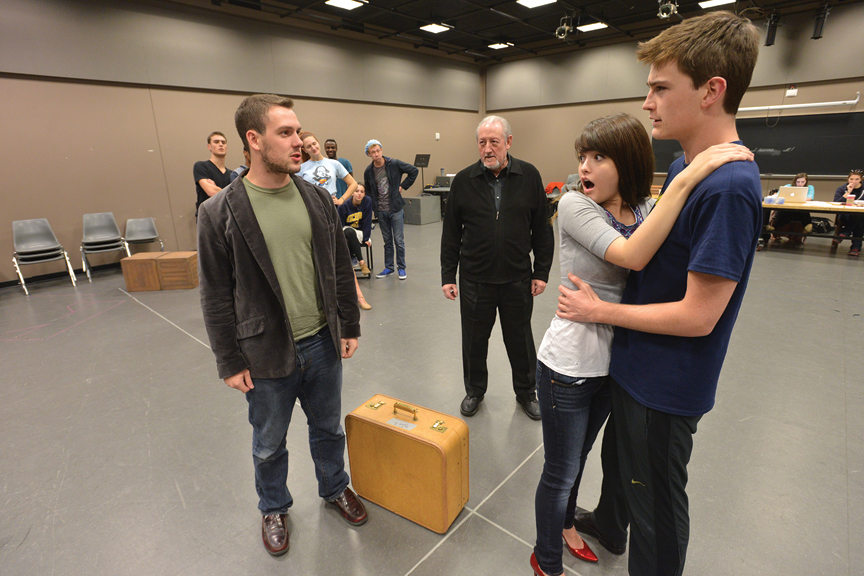 The University of Michigan’s School of Music, Theatre and Dance will present William Shakespeare’s The Comedy of Errors on December 5-8 at the Power Center in Ann Arbor. John Neville-Andrews, Professor of Theatre (Acting and Directing) Head of Performance will direct. He has worked as an actor, director, producer and teacher in many different settings in the US and in Europe for more than forty years. Recognized by The American Theatre Association with an award for “contribution to Theatre as an Author, Actor and Director,” for the last twelve years he has been the Artistic Producer of the Michigan Shakespeare Festival. Neville-Andrews has also directed The Comedy of Errors three times before. In this production, he’s “focusing more on the farcical aspects of the play than in the past.”

Neville-Andrews: The Comedy of Errors is reputed to be Shakespeare’s first play and for him to write, what is considered in today’s theatrical world, a farce, really shows how forward thinking and innovative Mr. Shakespeare was.

Speaking of forward thinking and innovative, I understand that you’ll be setting this production of The Comedy of Errors in New Orleans during Mardi Gras—in the Age of Aquarius, no less! Is that to help the audience suspend disbelief, since many of us probably imagine, or have heard, that anything goes—or went—then and there?

Neville-Andrews: I’m not actually using the location of New Orleans; I didn’t want people to question why we weren’t using authentic accents. But the show is during Mardi Gras in the late 60’s. (This is the first time I’ve set this play during Mardi Gras.) I selected Mardi Gras for exactly the reason you mentioned—”The Comedy of Errors, Mardi Gras, Anything can happen; and it does!” is our mantra.

Keeping with the Mardi Gras theme, will your actors wear masks to help create and maintain the double twin confusion around which the plot spins?

Neville-Andrews: We will, to help accentuate the celebratory Mardi Gras atmosphere, at various times be wearing masks, plus wearing those ubiquitous beads, bunting and colored lights on the set. Although, at this stage, there are no plans for anyone “baring breasts for beads,” another Mardi Gras tradition.

We strongly associate Mardi Gras with music. Will you have music in this production?

Neville-Andrews: Yes, we have a faux Zydeco Traveling Band in the show—Accordion, Trombones, Guitar and Washboard. And, of course, to go along with that, dancing.

In last year’s U of M School of Music, Theatre & Dance production of Midsummer Night’s Dream there was a fair amount of gender bending, actresses taking male roles and vice versa. Do you plan anything like that this time?

Neville-Andrews: No there is no cross gender casting, the show is crazy and complicated enough as it is. But… there is some drag act going on.