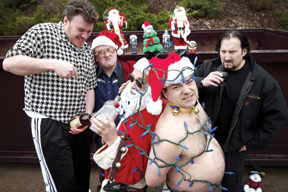 The Trailer Park Boys—the comedic troupe behind the hilarious Canadian mockumentary series of the same name—is bringing their “Dear Santa Claus, Go F**k Yourself” tour to the Michigan Theater on Tuesday, December 10. Featuring Ricky, Julian, Bubbles, Mr. Lahey and Randy, the live performance will focus on the misadven- tures of the fictional trailer park residents as they celebrate Christmas, white trash style. Rumor has it that even Santa Claus himself will be making an appearance. Expect drinking, drug use and seriously inappropriate jokes—not for the faint of heart.