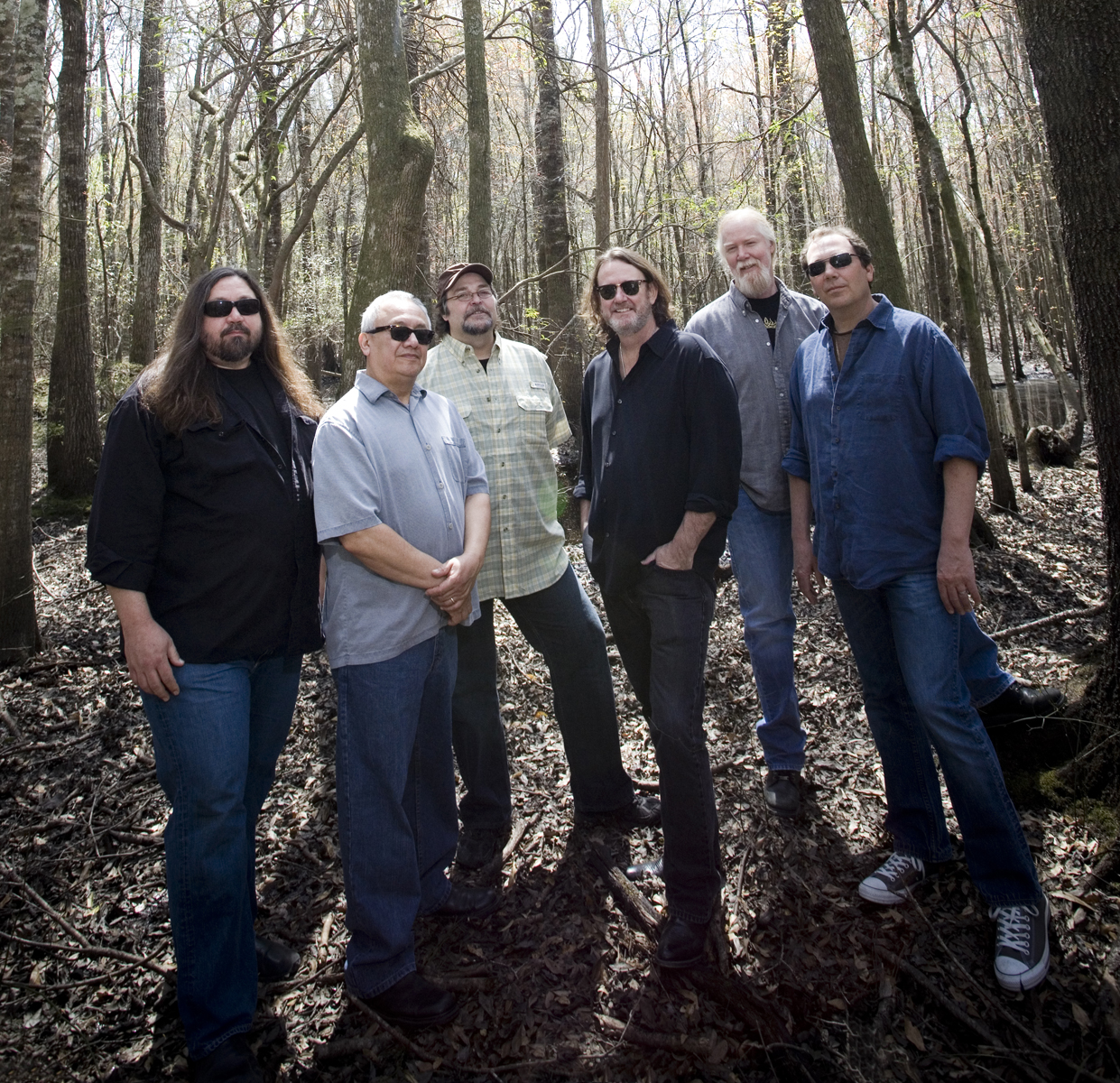 After 27 years on the road, it is safe to say that Widespread Panic are masters of their craft. With a repertoire of hundreds of originals and cover tunes as well as a passionate fan-base that follows them all over the country, they are one of the premier rock bands touring the U.S. today. Their high-energy brand of southern, funk-infused rock and roll switches genres on a dime and is held together by the band's chemistry and improvisational prowess. We talked with bassist Dave Schools and drummer Todd Nance before their 2013 Fall Tour pit-stop in Detroit on Tuesday, September 24 at the Fillmore.

Do you still get a sense of anticipation of excitement before Fall Tour starts? What goes on between now and when you hit the stage? Any pre-tour rituals?

TN: I can never sleep the night before we leave. That’s one of the great things about it—it still feels like it used to. There is a little more pressure involved now a days then back in the old days.

DS: Before the first show we’ll do an extensive sound check and maybe a little rehearsal. Try and get our sea legs back and see what everyone has been up too. I check out the new gear—you never know what new toys Jimmy [lead guitar] or Sunny [percussion] are going to bring.

What has been your performance highlight of the year—Widespread Panic or otherwise?

DS: For me personally, getting to play with John Fogerty was a really big deal. My parents used to buy me those 45s when they came out, the Creedence tunes. So I would be like four years old and listening to “Down on the Corner” and “Run through the Jungle.” Creedence was one of the first rock and roll bands that I ever heard, so it was a huge full-circle moment. John [Fogerty] was as nice as good be and loved that he got the chance to spar a little with Jimmy and JB [vocals/guitar].

What is the best concert you’ve seen this year?

DS: You know, that is kind of a two-part answer. Jimmy and I went over to Derek and Susan’s house [of the Tedeschi-Trucks Band] the night before Wanee Music Festival. They played us some of the new record, which hadn’t been fully finished yet. But we heard some new songs from the studio and we were really impressed. I didn’t think they would have the nerve to break out new songs at Wanee, but sure enough they did and they were great. I think Derek and Susan are one of the best things going in music right now—they are kind of an old school soul revue. So that was a really great concert.

Dave, I saw you have a new side project coming out called ‘The Hard Working Americans.’ Tell me about the new band.

DS: That’s a band we put together around Todd Snider. He is a folk-singer in the nature of Jerry Jeff Walker and John Prine, who were sort of his mentors. He has been recording music and making records for about 29 years, so he is around my age. We’ve known each other for a long time and we just wanted to do some stuff together. We wound up creating this group of special musicians—Duane Trucks on drums, Neal Casal on guitar and Chad Staehly on keyboards—with the whole idea being an album of covers. There are a lot of songwriting friends that Todd knows, whether they are from Nashville or other places around the country. We did these songs but we deconstructed them and reinvented them. Its kind of like how Led Zeppelin reinvented blues tunes and came up with stuff like "Whole Lotta Love."

You recorded the album at Bob Weir's TRI Studios out in California, where Bob Weir streams a free concert on Wednesdays at tristudios.com. Why pick TRI for the album?

DS: It's a really large studio with two big rooms. The room we do the TV show  in is a very special room that has been outfitted with a constellation sound-system. That means that the whole room is mic'd and there are speakers imbedded in the ceiling and the walls. So we can play quietly, and not need monitor wedges and headphones. It basically sounds like we are playing in your living room. So TRI is a pretty great toy—it hasn't been used to much as a recording studio. Its outfitted for hi-definition, modern technology and streaming, but we get to run the sound through Bobby's old school stuff which makes it sound warm and real. It really is an incredible facility—I live a half hour away so I get to go down and just do anything. I was actually down there recording my Dad this weekend, a few songs that he had written and published in the 70s. Bobby has really done a great thing creating this environment for us to use.

What are some of your favorite songs to play live?

TN: My stock answer for that is “the next one”. I really like them all—there really isn’t one song that I dread playing. I know it sounds like bullshit but its true [laughs]. But you know, my favorite might be Space Wrangler. But I’m always excited to see what we are going to do next.

What have you been listening to recently? What is on your playlist on tour?

TN: I am a huge fan of satellite radio. I love the outlaw country and deep tracks stations. Those are the two stations I listen to a lot. I also listen to a lot of Townes Van Zandt and John Hiatt. Also, check out Rosanne Cash [Johnny Cash’s daughter]. Some of the songs and arrangements she does are just fantastic—I think she might surprise you.

DS: Jonathan Wilson, his record was called 'Gentle Spirit' and it is really terrific. Add in Neal Casal's "Sweeten the Distance" record and you have this whole California, stoner, surfer thing that goes back to Jackson Browne and David Crosby. I know that Jonathan has a new record coming out that I am really excited to hear. Other than that, I just pour through stuff. But I have been working so hard on projects that I have been listening to that and making sure that I got it right.

Tell me about playing with John Fogerty at Lockn’ Festival. What was that experience like for you?

TN: We rehearsed Friday night before the festival. [Fogerty] thought Jimmy Herring was just the greatest thing in the world. He let Jimmy cut loose a little bit and we had a lot of fun out there. Since the songs were so short, we really had the opportunity to jam out—I think that was the best part about the show.

Getting back to Panic, how do you construct the set-lists? Do you take turns, wing it? How exactly do you pick the order?

DS: It's something that I have been trying to do lately because I can just get it to Jimmy quicker. He likes to have a little extra time to work on the tunes. I do it in the front lounge of the bus, usually on the way to the venue. Sometimes you see friends there who will make suggestions and sometimes I just get really flustered and let JoJo [keyboards] do it [laughs].

Panic hasn’t been to Michigan since Fall Tour 2011 when you played the Fillmore in Detroit. Any difference between northern crowds and the southern crowds you typically play for?

TN: You know, Detroit has always been pretty good to us. We used to play the St. Andrews Hall and we always had great shows there. Michigan crowds remind me of crowds from the south—very boisterous. They are into it.

What is the best part about touring and being out on the road?

TN: Getting to play music every night is the best part. We all still get along great, so its fun for us to get out there and play. This is what we do.

DS: Those certain times when something really special happens onstage that wasn't written into the set-list or discussed beforehand. You know, one of those magic moments that everybody picks up on—that's what makes it all worthwhile. Doing the same thing every night, to me that is in insanity, or at least would breed insanity. I love when we get to one of those moments where we jump off a cliff and drag the audience with us. It is the surprise moments. Sometimes it is a graceful recovery from a complete and utter train wreck. Without the possibility of utter atonal madness, nothing beautiful could ever happen.

At what point in your life did you know that you wanted to be a professional musician?

TN: It happened to me a few times when I was a kid. I got a guitar when I was in the 5th grade and took guitar lessons. And then after I saw Lynyrd Skynrd in 1975, that’s when I knew this is what I wanted to do.

How do you spend your time off from Widespread Panic? What do you do when you aren’t out on the road?

TN: I like to go fishing [laughs]. I live just outside of Athens, Georgia out in the country. I go home just to chill out really. I got a pond on my land—I like to go fishing, watch the birds and hang out with my wife and three dogs. For me, it is either full on or full off.

DS: Lately its just been hanging around the house and hanging out with my wife and dogs. You know, trying to keep things growing and preserve the fruit harvest and things. Just enjoying having a home in a beautiful place and a great person to share my time with. It makes going out on the road pretty hard, but there is a balance.

What advice do you have for aspiring bands out there that are trying to make it big?

TN: It takes a lot of perseverance—if you are going to do it, you really have to submerge yourself in it. Hopefully you’ve got some talent and play with the right people. You need to have chemistry with the other people in the band. It takes a lot of things to make it click—it is not just talent or luck.

DS: I'll tell you exactly what Peter Buck from R.E.M. told us when we were up and coming. He said "keep your appointments". He elaborated upon it and said play the gigs, play the pizza joints, play the bowling alleys. Play whatever you can play and just get out there onstage and play your best. That is what people pick up on, and you can pick up fans everywhere. And it certainly worked out pretty well for those guys. They played their share of pizza joints and bowling alleys, and so did we. But you take it in stride. Every stage you perform on, come ready to play and be on time.

Widespread Panic plays the Fillmore in Detroit on Tuesday, September 24. Tickets are $40, doors at 6:30pm, showtime at 7:30pm. For more information visit www.widespreadpanic.com