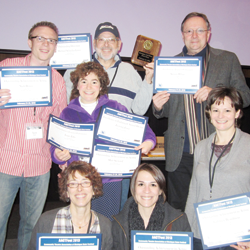 According to critics, The Ann Arbor Civic Theatre’s production of Leaving Iowa is nothing short of fantastic — the play recently won first place in Michigan’s American Association of Community Theatre Festival and will travel to compete in the regional competition in Wisconsin on April 18th – 21st. In celebration of the victory, a public performance of the award winning play will take place on Saturday, April 6th in the A2CT Theater. The play is a comedy about a young man who drives across Iowa in search of a proper resting place for his father’s ashes. He eventually reconciles his past and present in the center of the United States. Proceeds from the event will help fundraise to pay for the acting troupe’s upcoming trip to Wisconsin. Free, donations welcome. 8pm. A2CT Studio Theater, 322 W. Ann St. Call 734-971-2228 for more details. www.a2ct.org—GMK