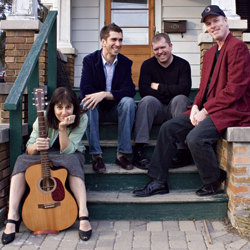 Few cities are as entrenched in music culture as Nashville, Tennessee—nicknamed ‘Music City’, Nashville is well known as a center of the music industry. On Thursday, August 15, the Kerrytown District Association is hosting their sixth annual ‘Nashbash’, an event that has built a tradition of showcasing the music of Nashville here in Ann Arbor. The free concert takes place in the Ann Arbor Farmers Market. In addition to the live music, there’s BBQ by Aut Bar, beer and wine, and an afterparty at the Aut Bar with music on their outdoor patio. Four acts will be playing during the event: Wild Ponies, Whit Hill and the Postcards, Haphazards, and Matt Boylan. All of the performers except Matt Boylan are currently based in Nashville, including Whit Hill who spent much of her creative career in Ann Arbor.