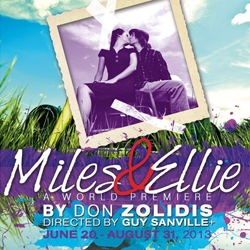 Would you take a second chance with your first love if given one? Playwright Don Zolidis’ Miles and Ellie, examines just that. It tells the tale of two young teenagers who fall in love, break up, and then reconnect again 20 years later. The play, in its world premiere, shows the humor that exists in heartache as the two main characters awkwardly reconnect with each other after Ellie returns home to spend Thanksgiving with her quirky family. It doesn’t take her long to realize that Miles is still pining after her, which cues the hilarious antics, and leaves the audience pondering personal hypotheticals: “What if?” It runs through August 31 at the Purple Rose Theatre.