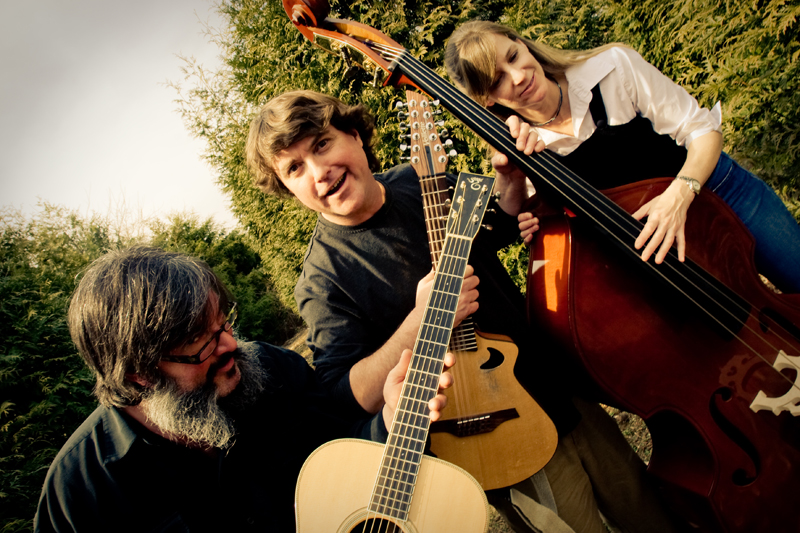 Known affectionately by his fans as "K-Dub," Keller Williams (not of the realty company of the same name) has been performing quirky, improvisational songs since the early 1990s. The 'one man jam-band' utilizes recorded musical loops during live performances to layer multiple instruments and essentially jam with himself. On Friday, April 11, the Fredericksburg, Virginia-born troubadour heads to Royal Oak Michigan for a performance with old-friends Larry and Jenny Keel at the Gardenia Bluegrass & Roots Festival in Royal Oak. Billed as "Keller and the Keels," the trio will work their way through a set of bluegrass standards, originals and interesting covers (they have been known to cover Sex and Candy by Marcy Playground and Rehab by Amy Winehouse). Current Magazine sat down with Keller to discuss potential upcoming projects, the songwriting process and benefits of Guitar Center's 30-day return policy.

How are you doing today Keller?

I can't complain, life is good!

You are performing a bluegrass set with Larry and Jenny Keel at the Gardenia Festival—do you have upcoming plans to record with the Keels?

No. We've talked about it, but there is nothing on the books right now. We have an idea for a new interesting project which could be pretty cool, but as of right now nothing is set in stone.

Your last album, FUNK, was recorded with your new band More than a Little. You also play bluegrass with the Keels and obviously tour as a solo act—where would you say you are focusing your music in 2014?

I think my day-job is the solo show, that is what I do the most. That is where everything kind of stems off of. There is a guy named John Brooke on bass and a guy named Piper on drums—I'm going for an acoustic dance type thing. Without much disco, but it is kind of like dance music in every sense of the word. All over the world, dance music means different things, so that is kind of what we are going for. That is another project that is in the development stage and there will be a while before that gets out to the public. But we will focus on some more intricate material and incorporating dance grooves from around the world.

Every time I've seen you live, basically the entire crowd was up and dancing. Has that always been a goal for your music since the beginning?

Yes, I've always considered myself an audience member. I started as a fan in the audience, so I try and put on a show that I would want to see as an audience member. I love the energy of dance music and music that makes you move. That has always kind of been the idea with my music—my right hand, which is the rhythm on guitar, kind of drives the performance and has a mind of its own.

Did you start your career as a solo musician or did you originally perform in bands?

I think the first gig I played for money was a solo show. I was about 16 and playing on the back porch of some bar to about 4 or 5 tables of people. So my first real paying gigs were solo acts. Then in high school and college, there were definitely different bands I played in. We never made any real money, but we played party gigs and stuff like that. It turned out that I could make the same music by myself that I was trying to create with a 4-piece band, so it kind of just went in that direction.

What inspired you to begin using loop stations and other instruments besides guitar?

It was a way for me to explore different avenues musically without having to hire a band. Once it started to work, I was able to afford a band, but it was working so well as a solo act that there was no reason to fix something that wasn't broken. It kind of just started out as a way to entertain myself, but then having the different instruments evolved into more than an experiment. Now a days, my goal is to do more with less, and I think the gear I travel with now lets me explore a wide range of sounds.

How often do you upgrade your gear with new instruments and new technology?

I'm constantly rotating my guitars, but I'm pretty firm with the looping stuff. I just switched from Echoplex to a more consumer-based product that you can buy at Guitar Center. The Echoplex loop stations are only available on Ebay and kind of hard to track down, so now if something breaks I can just head to Guitar Center and pick up a replacement.

It's funny that you mention Guitar Center, I actually saw you play a show in Cincinnati in 2012 where you told a story about how the airline forgot all of your gear. You had to go pick-up all of your stuff at Guitar Center right before the show and you played the gig.

Guitar Center has a 30-day return policy that has saved me many, many times [laughs]. There have been many, many times that I have bought things and returned them the next day simply because my stuff never showed up at baggage claim.

I really enjoyed the story, especially because it seemed like you were just improvising it in the middle of one of your songs. Has there always been a conscious decision to incorporate humor in your music or does that happen naturally?

It's about entertaining myself basically. I try to stay away from expressing my problems through music, even though I understand why people sing about their problems. It's their life and what they are going through in that moment. Through music, you can connect with other people who are going through similar situations and that is the beauty of it. At the same time, I am very grateful to have the life that I have. The people that surround me make me happy, and I enjoy shedding a positive light on things. I can't ever recall consciously trying to be funny, but it is just something that sort of comes out in my songwriting. I can't seem to force it, when I do they are never songs that are keepers. But yea, it's weird. I guess it is just the way that I see things and the things I sing about onstage just happen to make me laugh at the same time. It's important to make yourself laugh first, you know?

What's the approach you are taking to songwriting now a days?

Nothing has changed dramatically in my life in the sense of changing songwriting. But yea, songwriting has been happening less and less. It is one of those things that has to come naturally, I can't really force it. The last song I wrote was a fictional story that I kind of gave myself a writing assignment to finish. It is about a female character who goes on an adventure and ends up eluding the police by stealing a police car. I kind of took a page out of the Danny Barnes songwriting book—Danny Barnes is an amazing banjo songwriter—and its kind of like making something up and following a storyline that is fiction. Danny Barnes has been clean and sober for many years but writes incredible songs about characters who go on drug binges and steal. They are really interesting and dramatic songs, but yet in real life he is totally clean and sober and even works with addicts. He is able to really bring a character to life and the last song I wrote was attempting to do just that.

You are a self-taught musician, correct?

Pretty much. I had my friend named Kirk Edwards who showed me a few chords when I was about 13, but other than that I kind of figured the rest out.

You definitely have a lot of musical talent. What were some of your practice methods to learn the advanced picking and musical theory that you use on your own?

I never really sat down and practiced to get better. It's always been about the songs and playing to entertain myself. That is pretty much where I went with the music. It was always about learning and playing the songs.

Thank you so much for your time Keller and we will see you at the show!