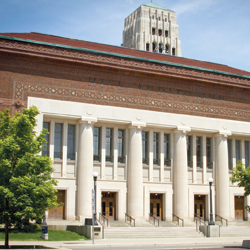 Few stages in America have as rich and compelling a history as Hill Auditorium — hailed as 'a monument to perfect acoustics', Hill has hosted artists ranging from Elton John to the New York Philharmonic, and even the Grateful Dead over the course of its 100 year existence. As the final segment of the America's Music series, Associate Professor of Musicology at the University of Michigan Mark Clague, along with local filmmakers Sophia Kruz and Anna Prushinskaya, will lead a screening and discussion on Wednesday, May 8 of the just-released documentary A Space for Music, A Seat for Everyone: 100 Years of UMS performances in Hill Auditorium. The hour long original film explores not only the unique history of Hill performances, but also its function as a cultural incubator for the arts community in southeastern Michigan. Through concert recordings, news articles and anecdotal interviews, the documentary proves a historical context for UMS performances in Hill Auditorium while showcasing the ever-changing community of students and locals that are an integral part of the building as well. 630pm. Free. Downtown Library, 343 S. Fifth St. 734-327-4200. www.aadl.org -GMK