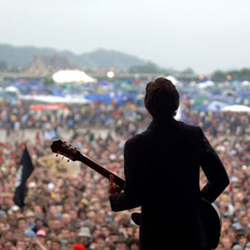 Festival Season is just weeks away, a time when culture and music are fully celebrated and anticipation is high. With so many festivals on the scene Current is here to show you what's hot. We've thrown together a Festival Guide of Current's top picks for the summer. The music festival scene is rapidly growing with new fests and fans appearing each summer. With a different party every weekend Current will make it easy for you to finalize your summer plans.

SUMMER CAMP
Coming in hot as the first larger festival of the year is Summer Camp Music Festival. For the 13th annual year Summer Camp will be held in Three Sisters Park in Chillicothe, IL on Memorial Day weekend, May 24-26th. With the festival continuously growing each year an estimated crew of 10,000 people will roll into the campgrounds this summer in anticipation of some of their favorite tunes. Headlining the party is three nights of Chicago native band Umphrey's McGee and Buffalo, NY native band Moe. If that doesn't pull you in Trey Anastasio Band (rock band Phish's lead guitarist) will also be belting out two sets. Sound Tribe Sector Nine, The Avett Brothers and Theievery Corporation are just a few of the supporting acts.

WAKARUSA
Cruising down to the Southwest is the next huge party, The 10th Annual Wakarusa held on top of Mullberry Mountain in Ozark, Arkansas. Attracting in about 18,000 music lovers each summer during the weekend of May 30-June 2. This years headliners are Widespread Panic, Dispatch, Snoop Lion and The Black Crowes. Along with over 100 more artists jamming throughout the weekend. This is a festival you don't want to miss.

NELSONVILLE
May 30-June 2 thousands will gather to scenic Hocking College in Nelsonville Ohio. This fest features indie acts like Cat Power, and Sharon Von Etten. If you're looking for a family-friendly festival to tote the kids to, this is the one for you.

MOVEMENT/DEMF
Saturday, May 25-Monday, May 27
Detroit, MI
Lord knows why they changed the name of his historic event. Detroit more than almost every other city on this hemisphere has a reputation for being an electronic music mecca, and Detroit Electronic Music Festival (DEMF) is its epicenter. This year's lineup stretches across styles—from avant-garde to super-danceable—at the cutting edge of EDM.

ROCK ON THE RANGE
Friday, May 17-Sunday, May 19
Columbus, Ohio
England has Download, Germany has Wacken, and America has Rock on the Range. For big-name hard rock acts there is no other festival in the country with a lineup this solid. Brace yourself for three days of grunge, hard rock, heavy metal and even a little stand-up comedy. Oh, and whatever you do, don't miss Ghost B.C.!

ORION
As far as Summer festies go, leave it to Metallica to play host to the grittiest line up of the summer, in no better setting than Belle Isle overlooking the ruin porn of Detroit on shore. Add the Red Hot Chili Peppers as the other headliners and you already have a full-throttle experience. Indulge your inner headbanger with the contemporary hard-rock stylings of Rise Against, Deftones, Dropkick Murphys, Gogol Bordello, Japandroids, Silversun Pickups and many more. Or pull out your glow sticks for  a second stage of heavy dance and dubstep artists including BASSNECTAR, Destroid, and Datsik among others and you have a musical experience that flexes its Detroit muscle. June 8-9.

ELECTRIC FOREST
Pack up the car and grab your friends, head to the Midwest for Electric Forest 2013. This festival has everything from bluegrass to electro house music, pleasing about 30,000 fans with all musical tastes. As String Cheese Incident's festival they will be playing a three night stand making sure to cover all that you wish to hear. The festival venue is also a main attraction for the fest. The Electric Forest is filled with art installations, lasers,  late night DJ's and LED lights. The Forest is a magical addition to this festival that will not disappoint. The weekend of June 27-30 will be filled with Pretty Lights, Passion Pit, Dispatch and many more varieties of acts.

BONNAROO
If you're ready for a hot weekend in the south with some of the most impressive bands around, Bonnaroo is for you. June 13-16 join thousands of music-lovers spread over 700 acres of farmland in rural Tennessee. Rolling Stone described it as, "the ultimate over-the-top festival."

ANN ARBOR SUMMER FEST
Friday, June 14-Sunday, July 7
One of the longest and most diverse festival in this list. Running for almost a month, Summerfest covers more than just a swarth of music—including Django Django, Amadou & Miriam, and a massive lineup at Top of the Pops. Also expect cultural events like experimental dance pieces, ballet, art installations and oh yes, a tapings of NPR's Snap Judgment at the Power Center, as well as a A Prairie Home Companion with Garrison Keillor at Hill Auditorium

FORECASTLE
Summer tour will begin to slow down as we move onward to Forecastle Music Festival held in downtown Louisville, Kentucky. Focusing on mostly Folk and Bluegrass influenced music, Forecastle is based in the city so camping is unavailable. About 30,000 hippies will be raging downtown Louisville during the weekend of July 12-14 with expectations for a huge party. With The String Cheese Incident preforming the first night of the festival, they will be playing the second night at a separately ticketed late night event at the Historic Louisville Palace and heading back to the festival Sunday for a special act called The Forecastle Incident with special guests. Along with String Cheese, The Avett Brothers, Animal Collective and Sharon Jones and The Dap Kings will also be bringing the noise this weekend.

PITCHFORK
Friday, July 19-Sunday, July 21
Chicago, Illinois
Pitchfork.com has had a choke-hold on what is new, hip and trendy in underground music for the better part of a decade, kick-starting the careers of Grammy Award-winning artists. Their festival looks like a weekend-long victory lap at high volume in the heart of Chicago. this year's lineup is the very best in high-and-low-brow entertainment: where else can you see R. Kelly and Bjork on the same stage?

BUNBURY
New to the festival family last year, Bunbury is back with a killer lineup including Belle & Sebastian, Tegan and Sara, and Fun. The trip down to Cinci will be worth the drive. The fest's unique grounds make it a great first-time festival experience for newbies. Bunbury is July 12-14.

ALL GOOD
Pollstar Magazine's, "festival of the year" in 2013 is back with a lineup that will make hippies shake their tambourines with glee. The Greatful Dead, Pretty Lights, and Primus are among the bands to jam with this summer. July 18-21.

LOLLAPALOOZA
Chicago's Grant Park will be rockin' the weekend of August 2-4. This year's lineup is on fire with huge acts like The Killers and Mumford and Sons. This fest has a heavy rock lineup, but you won't want to miss the electro fun at Perry's at night.