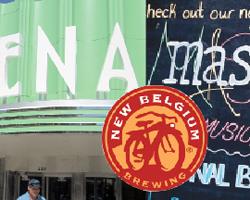 Moving restaurants to make room for more restaurants — or expansion — is always a good sign, especially when a historic building is renovated in the process. And what we have this month is some new eateries, imports and progressive ideas, which all arrive as
welcome guests.

■ Lena, a new restaurant located at 226 S. Main St. in the old Cunningham’s Drug Store, has opened. They serve latin-inspired cuisine. In the basement  of the same building, Cafe Habana has found a new home after the expansion of the Blue Tractor, 207 E. Washington, in the spring. Habana, which will open daily at 5pm, will have its own entrance  and menu. The entertainment will include live music and salsa nights.

■ In the basement of the Blue Tractor, where Club Habana Cellar Lounge was previously located, a whiskey and bourbon bar, Mash (same owners as Blue Tractor), has opened. The new venue will feature a full bar including rare liquors and progressive live music.

■ Two states have lead the way in the growing popularity for microbrew beers: Colorado and Michigan. Now one of Colorado’s most popular craft beer companies — and the third largest microbrew distributor in the nation— New Belgium Brewing Company is making its way into Michigan. Fat Tire is the company’s most celebrated beer, but they have a variety of others, including seasonals.

■ Last year the University of Michigan student government requested that the University ban the sale of bottled water on campus. While the University has not agreed to the request, a compromise has been made: 42 water bottle refill stations have been installed and 74 refill attachments have been added to existing water fountains.