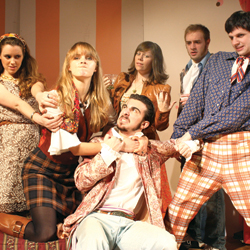 As a teenager you think your love life is hard and the smooth-sailing adults just don't understand — then you enter adulthood and realize you were being a melodramatic punk, because things get way more complicated and, often times, even stranger. That's where Alan Ayckbourn’s Bedroom Farce — which will be performed at the Ann Arbor Civic Theater January 24-27 — sets up its story: following four married couples in the 70s through an unexpected whirlwind of relationship drama in the dawning of the sexual revolution. $17. 8pm Thursday – Saturday; 2pm Sunday. Arthur Miller Theater, 1226 Murfin Ave. 734-971-2228. www.a2ct.org