The Meaning of Almost Everything 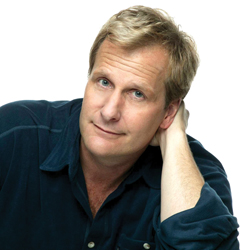 Fourteen of Jeff Daniels’ plays have been produced at the Purple Rose Theatre, one almost every season since the theater opened in 1991. Daniels’ plays, often laced with humor, have been about a wide variety of subjects, some semi-autobiographical, others less personal. His fifteenth play, The Meaning of Almost Everything, premiering at the Purple Rose on January 10th, and running through March 9th, is perhaps his most quirky and most whimsical to date. The tongue-in-cheek, grandiose sounding title alone clues you into that. It’s a comedy with elements of slapstick, vaudeville and farce, yet it’s also a tragedy, as it explores the joy and pain of life and the absurdity of it all. "I've never been one to think whatever may come after this life will be better,” says Daniels. “One can always hope and pray and believe, sure, but given the choice between the known and the unknown, frankly, it seems a lot of us would rather just stay put, thank you very much. That's the 'What if…?' that drove the writing on this one. How do we turn this life of ours into an everlasting one? Forget leaving a legacy or living on in other people's memories, I mean staying put. Right here, right now, forever and ever. That it doesn't work that way is the conflict in the play. And in us."

Truly universalizing the story, the two everyman characters in the play don’t even have names, just letters. Actors Matt Gwynn and Michael Brian Ogden portray roles “A” and “B,” two men in an undefined place and time. They’re safe and comfortable, but nothing happens to them or around them. One of them wants to stay. The other is less certain. Guy Sanville, the Purple Rose’s longtime Artistic Director, and the play’s director says, “It’s about a guy who has decided to stay in a bubble. Knowing what we know about life, the heartaches, that it’s going to end, he’s decided to play it safe. I like this play because it asks a lot of big questions. I think Jeff is talking here about finding the courage to face the truth. This play isn’t about facing death, it’s about facing life."