Michelle Mountain at The Purple Rose 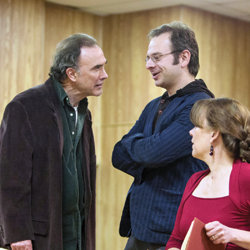 The Purple Rose Theatre’s spring production, opening on March 28th, is Moises Kaufman’s 2009 Tony Award nominated play, 33 Variations. The variations referenced are Beethoven’s Diabelli Variations, one of the most celebrated works ever written for piano. The play is set in the present, and in 19th century Vienna. Its characters include Beethoven, and the music publisher Diabelli, who wrote the waltz theme upon which the Variations were built. The contemporary characters are musicologist Katherine Brandt, and her adult daughter, Clara. Katherine is obsessed with unraveling the mysteries of the Variations, but pays little heed to her daughter, and is also attempting to ignore her own struggles with ALS.

Mountain: When I was a kid, every Sunday morning—this can’t be true, but in my memory it’s true—I woke up to really loud Beethoven and my dad conducting away in the living room. (Laughter) I like Beethoven now.

Who will play the piano in your production?

Sanville: We’re not going to have a live pianist. [The way the play is usually produced.] For one thing, a piano in a small space can be overpowering.

I can see that.

Sanville: There’ll be some [pre-recorded] piano music, but we’re going to do variations on the variations, and explore them with other instruments. There are a lot of interesting things that we can do that will support the play viscerally. We have one of the best music schools in the country right down the road. I’m sure we could have found a couple, three piano players. (Laughter) But the play isn’t about the music. It’s about a woman and her daughter.

Michelle, you’re playing the mom. I don’t know you well, but I’m guessing you’re not the kind of mom that you’re portraying here.

Mountain: Hopefully I’m not that kind of mom. But the more I’ve been working on it, the more I believe I share a lot of personality characteristics with Katherine. I can imagine being so completely immersed in my own work that I don’t see my children. I don’t live that way, but it isn’t that hard to extrapolate there. My real mom self is probably way too, “Did you eat? What did you do today?”

Another thing I share with Katherine, I really can’t stand being unable, or incapable. Ugh.  I get annoyed when I don’t do things well. So then this physical deterioration [of ALS] is going to be fascinating because I know already it’s gonna just piss me off. I don’t like being helped; I don’t like asking for help. It’s much easier for me to say, “Can I help you?” than to say, “Could you please help me?” This script is incredibly well written. The more I look at it, the more I love the way things are revealed, just kind of touched upon, and then they come back around.