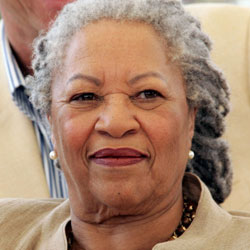 A new book by a Nobel Prize winner is always a significant literary event, and Toni Morrison’s latest novel, Home, is that and also a fine example of a master at work. Morrison, who received the Nobel more than twenty years ago, and also won a Pulitzer and numerous other awards, has written in many genres, including essays, children’s books, song lyrics, and even the libretto for an opera, but it’s her novels that have received the most acclaim and earned the loyalty of her many readers. This, her eleventh novel, will disappoint none.

Home’s bedraggled, nearly broken hero is Frank Money, a recently returned veteran of the Korean War. “Korea. You can’t imagine it because you weren’t there.” There, among other horrors, he witnessed the death of his two closest childhood friends. But though he clearly suffers from what is now labeled as PTSD, it is not clear if his symptoms are caused solely by Korea, or whether he’s actually experiencing ongoing traumatic stress disorder caused by the brutal racism of 1950s America. He’s served in an integrated Army, but has returned to a segregated country, not only the deep South of Georgia, his boyhood home, where he eventually ends up by book’s end, but even the Seattle where the book opens. Morrison’s story traces Money’s cross country trip, giving us brief snapshots of life for African Americans in that perhaps most mischaracterized decade of the recent past, the Father Knows Best, Leave it to Beaver, whitewashed idealized Fifties. She reminds us of the institutionalized racism of the North; “No part of said property hereby convened shall ever be used or occupied by any Hebrew or by any person of the Ethiopian, Malay or Asiatic race excepting only employees in domestic service.” and of the depravity of the Klan and others in the South. We are also reminded of the paranoid insanity of McCarthyism, and of eugenics, still very much alive in the US, despite its recent horrific excesses in Nazi Germany. Even the atom bomb, which loomed heavily over the Fifties, is referenced, “After Hiroshima, the musicians understood as early as anyone that Truman’s bomb changed everything and only scat and bebop could say how.”

But don’t get me wrong; this is not a downer of a book. As in all her previous work, Morrison’s language sparkles and she shows an impeccable ear for black argot.  “Misery don’t call ahead. That’s why you have to stay awake—otherwise it just walks on in your door.”  She also displays an unerring eye for the historically accurate, telling detail; “A loaf of bread ain’t but fifteen cents.”

This is a little book and Morrison is not after pointillistic detail in Home, but rather in the revealing allegorical sketches that still manage to create a full bodied picture of a time and place that is at once harsh and beautiful, it’s worst aspects thankfully mostly gone but, one hopes, not forgotten. It’s not giving away the ending to say that, despite the trials that Morrison’s people must endure—and endure they do—this is ultimately an uplifting, even hopeful book.