The past and the future 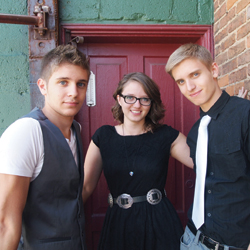 When Neil Woodward and the trio called Cats and the Fiddler make their annual return to the Ark on Sunday, March 3, their show will be a complex audio/visual presentation of the past and future of American roots music. The past will be on display in the form of Woodward, who has been performing at the Ark, and throughout Michigan, since the mid 1970s; he’s been designated Michigan’s Troubadour by the State Legislature and is a virtual library of traditional folk music, as well as a virtuoso master of a music store’s worth of stringed and wind instruments. The future will be represented by the three members of CATF, whose combined ages—they’re all still in high school—don’t add up to Woodward’s. But it’s not quite that simple either: that Woodward equals the past, and CATF equals the future.

Besides being a storehouse of traditional music, Woodward has, over the years, also added many of his own songs and instrumental tunes to that stock, and continues to create them to this day. He’s at work on a new recording and the evening will definitely not consist of him reprising old, fossilized material. “I have a pile of true stories and music waiting to be heard,” he says. And while CATF is at the beginning of what will surely be a long and impressive musical journey, they also are no Johnny-come-latelies. Twin brothers, Shaun and James Richardson and their cousin Carmen Gibes have been astounding audiences since they were five years old. Woodward and CATF also have a lot of history together. Shaun began studying fiddle, guitar, mandolin, Dobro and banjo with Woodward when he was just six years old and continued lessons with him for seven years. Shaun, James and Carmen also studied songwriting, arranging and recording with Woodward and the trio has been sharing stages with him for well over a decade. Woodward says, “…these are my children (with all due respect to their families). Imagine how I feel when I see and hear them playing so well, having so much heart for the music, for each other and for the audience.”

The evening will also feature several special guests. Step dancer Sheila Graziano, well known in the area as a performer and teacher, and also Woodward’s frequent collaborator will join in on feet, while Brien Ahern (another talented string student of Woodward’s) as well as his longtime collaborator, Gary Weisenburg will add even more instrumental variety.

This evening will be Woodward and CATF’s tenth and final Ark show. Shaun says, “This is our last season as Cats and the Fiddler. Our sound has gradually been transforming into the Country/Acoustic genre, so we have been working on our switch from “Cats and the Fiddler” to our new band “Out of the Blue” with new sounds! We don’t plan to stop performing, it’s too much fun!”