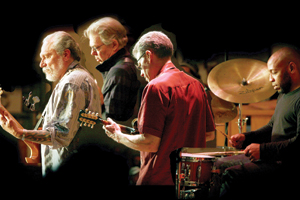 Hot Tuna is, among many other things, practically a synonym for longevity in the music world. The duo of Jorma Kaukonen and Jack Casady have been performing and recording together since 1969. They were both founding members of Jefferson Airplane, the famed poster child band of the psychedelic ‘60s and ‘70s, and have played as a duo and fronted a wide variety of larger bands, both acoustic and electric, for the past forty-plus years. And they show no sign of slowing down or letting up. Though they began recording studio albums in 1970 and have produced numerous such recordings over the past four plus decades, while also releasing a number of live and compilation recordings, including reunion
albums with Jefferson Airplane, last spring, after a hiatus of nearly twenty years, they put out a new studio album. The album, Steady As She Goes, is both a hearkening back to the music that they started with, and a testament to their growth and evolution over the years.

By the late 60s Kaukonen was already considered one of the giants among electric rock guitar players—and few could match him on acoustic blues guitar styles—while Casady was one of the leading exponents of the electric bass, when they combined forces to play the country blues music that inspired them and so many of the other rock musicians of that era. Their live sets today still contain songs like Candyman and Hesitation Blues, which they first performed and recorded more than four decades ago. But right from the start, Hot Tuna was not only faithfully paying homage to the country and Delta blues music they loved, but was also creating new songs and instrumentals that greatly expanded and embellished the traditional forms of those older genres. These days they continue to focus on where they have come from, where they are now and where they still see themselves heading. On Second Chances, a new song on the appropriately titled Steady As She Goes, Kaukonen sings, “The mirror shows the message, you can’t deny the time,” but on the same song he also adds, “The dancing isn’t over till the last note’s been played,” and “We bow our thanks.”

Although Kaukonen and Casady have been the unchanging core of Hot Tuna throughout the years, they have at various times collaborated and surrounded themselves with many top notch musicians: Will Scarlett, Paul Kanter, Papa John Creach, Charlie Musselwhite and David Bromberg among others, to form an ever morphing series of sounds. Their most recent acoustic incarnation, and the lineup they’ll present when they return to the Ark on March 6th, features expert mandolinist, Barry Mitterhoff. 8pm. $35. 316 S. Main St. 734-761-1818. www.theark.org.