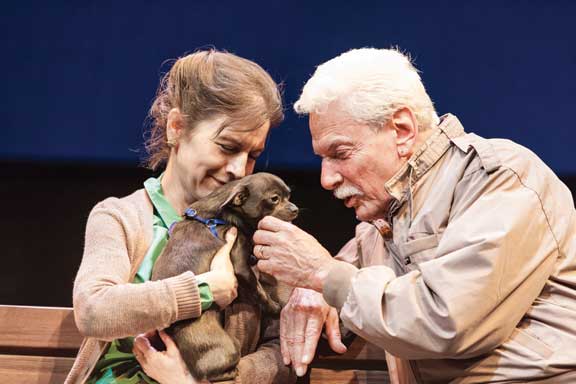 The Purple Rose Theatre’s summer offering is, of course, a rom-com. The Last Romance, running through Aug 30, is Joe DiPietro’s latest work, following such Broadway smash musicals as I Love You, You’re Perfect, Now Change and Memphis. The Last Romance is not a musical, though music does play an important role in the play. But we began our conversation with director, Michelle Mountain, by asking about another important ingredient of the play.

I’m sorry to start with this, but is there really a live dog in the show?

No, no it’s fine. After all, there is a dog on the poster. Yes, there is a dog. We had dog auditions, and we have two dogs, and they trade off so they, and their owners, are not tied up for the entire summer. They’re both great dogs, they’re hysterical. Our design office is now Peaches’ dressing room. (Laughter)

OK, now that I have that out of my system, let’s talk about the play.

It’s about an older gentleman, Ralph, who doesn’t feel well enough one morning to take his usual walk. He takes the same walk every day. He and his sister live together, they eat dinner at the same time every day, he’s got a routine. But that afternoon he feels better so he goes for his walk and thinks, “What the heck,” and goes a different way. And sees someone.
What’s appealing about the play, I think, is that it takes the notion of falling in love seriously. You don’t have to be twelve, or twenty, or forty. It can knock you sideways at any point in time. There are so many different kinds of relationships in the play, brother-sister, man-woman, along with memories… when he was younger, Ralph had an audition at the Met, so in the show there’s a young man who sings opera.

He’s revisiting things you normally associate with youth, falling in love, opportunity, the road not taken…

Yes. Nothing’s ever over, or without hope. This play isn’t about old people in love. This is about people. We’ve had 20 year olds in the audience, and older people, and they all love it. In fact, one of our apprentice’s friends from high school came to a preview with her boyfriend. I noticed them because the young man wore a coat and tie, and she was dressed up too, and I thought, “Wow, for a preview…” Our apprentice told me later that she saw on Facebook, that after the show, he proposed.

It’s such a beautifully constructed play, and the opera stuff lends a grace to it that is pretty remarkable. At one point the woman Ralph’s fallen for asks him, “Why are the singers so fat?” And his response is, “Everything in life is so small. Everything in opera is big. You walk across the stage, you sing an aria; you open a door, you sing an aria. Big people, big emotions, big, big, big.” And she says, “Life should be like that.” 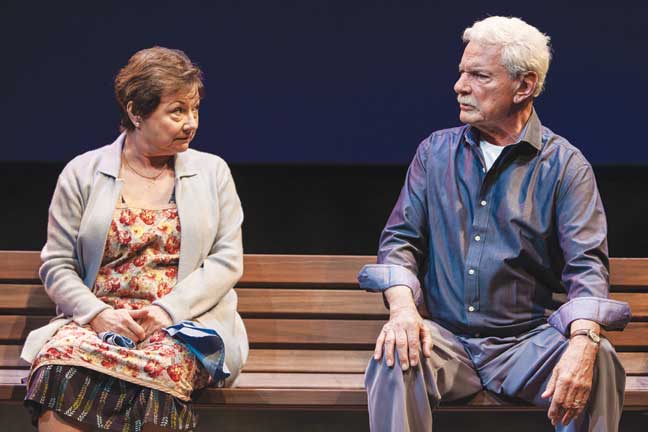