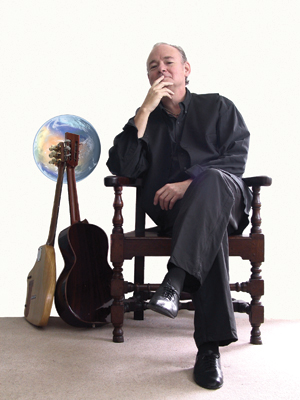 When Adrian Legg returns to the Ark on Monday, July 9 it will be one of many stops on a
tour in support of his most recent recording, Slow Guitar. Don’t let that title fool you. It
does not mean that we won’t get to hear the full range of virtuosic finger-style guitar
playing which Legg has long been famous for. You don’t get voted Guitarist of the Decade
by Guitarist magazine and Best Acoustic Fingerstylist four years in a row by the readers of
Guitar Player Magazine if you only make use of the low end of the metronome markings.
The phrase, “one of the best guitar players in the world,” doesn’t get used in the same
sentence as your name if you only play whole notes, no matter how beautifully. Legg
himself is certainly not hung up on pace. As he said recently, “Fast, slow, any tempo is fine
if the piece has an identity and a soul. Bravura can be fun, but not repeatedly.”

No, there are other reasons for the tempo and timing of this new release. "These
guitar pieces are taken from across thirty years of my music composition,” says Legg. “I
wrote them for my own solace and am touched to find that listeners turn to them for the
same reasons. The original recordings are scattered over CDs which are out of print or hard
to find. It seemed to be time to gather them together, so I took the opportunity to make fresh
recordings." Legg also adds, “There is a practical element to re-recording in that the
original takes belong to corporations that have since become different entities with different
priorities. I wanted a recording that belonged to us – myself and the people who liked some
of the tunes.” Legg’s mastery of technique combined with his apparently boundless musical
imagination makes his music impossible to categorize. He can, from track to track, and
sometimes within a single piece, sound like Segovia, Leo Kottke, Robert Johnson, Ry
Cooder, and even Earl Scruggs or the Chieftains. Besides playing, the British born
musician has long engaged in many different activities related to the guitar: composing,
teaching, writing books, magazine articles and NPR commentaries, and designing and
creating electric and acoustic modifications to the instrument. “I'm still exploring. The steel
string guitar is the American instrument; it has served, and evolved with, many cultures and
ages, and has a correspondingly huge vernacular. I try to look at it broadly – perhaps as a
foreigner it might be easier for me to see the wood.” Legg has been coming to the US for
extended tours for more than twenty years. “A tour is usually a hectic tunnel of directions
and hotel rooms, ending in jet lag and confusion.” But there are rewards. About the Ark, he
says, “Mainly I remember warmth, support and validation, beside which the rigors of the
road become insignificant. I think I might have finally grown up in the Ark and the places
like it. I certainly learned that music doesn't just belong to musicians.”