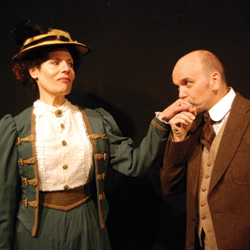 The Performance Network’s current show is Stephen Sondheim’s A Little Night Music. In October, when the cast was in rehearsal for the show, I talked with John Seibert, who plays Fredrik, one of the leads. Seibert has also acted in, or directed, a number of previous Network productions.

Have you done Sondheim before?

The only Sondheim I’ve done is this show, 28 years ago. Same role. The real challenge now is that it’s a smaller company, so we have some additional responsibilities.

Additional vocal responsibilities. The score has been split up, reassigned, because there are fewer characters, the overture has been slightly rearranged, and we’re all visible when the piece starts. It’s harder work. (Laughter) I think it’s a beautiful piece for this space.

This musical is about many aspects of love, including aspects we don’t often talk about honestly. (Laughter)

No, but Sondheim has a gift for that. I suppose almost every story is a love story, especially in musical theater. But his take on romantic love is a little darker than probably any other, even contemporary composers. It is, as you say, honest, but it still retains a tremendous amount of romance. It touches on the different phases of love that every generation goes through at various stages of their lives. The play spoke to me in a very different way in 1984, when I did it last. Different from how it speaks to me now, in 2012, having been married for 26 years and having a child that is about my character’s son’s age.

This show has Sondheim’s best-known song, “Send in the Clowns.”

We rehearsed that song for the first time last night. Naz Edwards, who is playing Desiree, is such a wonderful singer. She is so respected in this community and has such a wonderful resume, having sung on Broadway, and done so many musicals, but she looked at me last night and said, “I’m not sure I’ll be able to get through this song every night. It breaks my heart.”

It’s written for an actress…

Sondheim’s music and lyrics are very intelligent and complex.

He is always a joyous challenge to listen to. The lyrics are dense, there’s a lot in there, but it makes you listen—it makes you want to listen. I think that makes it especially wonderful for a theater audience, as opposed to a film or a television audience. It’s meant to be enjoyed in the
moment, intimately, like we can do it here.