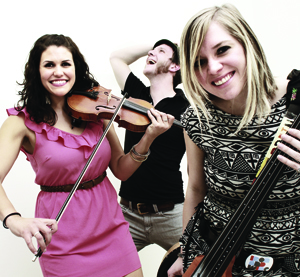 The Encarta World English Dictionary defines moxie as courage combined with inventiveness. That definition applies aptly to The Moxie Strings, the duo of fiddler Diana Ladio and cellist Alison Lynn. The pair, under their previous name, String Cheese, has been playing their unique blend of Celtic-influenced, rock-inflected music throughout Michigan and beyond for several years now, and will be releasing their first full length recording with an album release party on May 19 at the Wolverine State Brewing Company, beginning at 6:30pm.

Both Ladio and Lynn are classically trained. The years of lessons and the countless hours of practicing are immediately evident in the sureness of their sound. Few musicians develop serious chops like theirs without that kind of training, but classical schooling doesn’t always provide adequate preparation for performance chops, i.e.: the visually exciting stage presence we more frequently associate with rock and pop music shows, or the freedom and abandon we often enjoy in folk and ethnic music concerts. The Moxie Strings’ gift is to blend all these elements into a seamless stage show. Forget any static image you might have of a seated cellist and a violinist rooted to one spot on the stage. Lynn hangs her electric cello with a strap around her neck, allowing her to play standing up, and both she and Ladio roam, constantly swaying, bending and twisting. Their movements echo and mimic each other and their music, reinforcing and elaborating on the intricate conversations of their instruments. Lynn is a master of the contemporary cello techniques that have freed and transformed the instrument from its traditionally limited melodic and harmonic roles, exploring its rhythmic and percussive possibilities. Ladio contributes the glorious tone that is the hallmark of the classical style, but also the fiery bowings and intricate ornamentation that is Celtic music’s contribution to contemporary world music.

On their CD and in many of their live shows, The Moxie Strings have been adding percussionist Fritz Mcgirr to their sound. Mcgirr, a member, along with Ladio, of the bluegrass/folk rock group Dragon Wagon, has a similar background to the two women. Also an alumnus of a classical music conservatory, he is adept at the typical drum kit, but also on the Irish bodhran, the Latin cajon and the African djembe. His eclectic array of hand percussion instruments and techniques further emphasizes the propulsive rhythms of The Moxie Strings. Ladio and Lynn not only draw on the rich heritage of the various styles they have absorbed, they are also passing along those skills. They teach their special fusion of classical, contemporary and world music to students and music teachers at schools throughout the Midwest. The future of music could not be in better hands.

Check them out at www.themoxiestrings.com.