Memories of Miles and Ellie 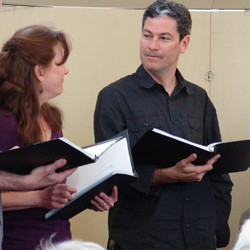 The Purple Rose Theatre’s next production, Miles and Ellie, is a world premiere by playwright, Don Zolidis, who penned last year’s White Buffalo. That was a moving and sometimes dark drama; this is a much lighter play about a woman returning to her hometown after being away for many years and reconnecting with her high school sweetheart. Purple Rose’s Artistic Director, Guy Sanville, and actress Rhiannon Ragland, who will portray Ellie, talked to Current about the new play.
Sanville: This is a full-blown comedy, almost a farce. It’s very funny—until it’s not.

Ragland: A little rom-com for the road. It’s a perfect summer show. If the rest of our season is a delicious, rich, three-course meal, this fourth show is the perfect dessert. It’s sweet and it’s touching, really fun. It may be a romantic comedy, but there are real things in it.

Sanville: There’s a Rod Stewart song that says “The first cut is the deepest.” It’s a memory play.

Ragland: It really deals with a big perception issue, the way you view what you’ve done, or the things that have happened to you in your life. Ellie ends up learning — it takes her twenty years to do it, but she gets a big life lesson. The second act flashes forward twenty years, and it’s present day. The first half is Ellie’s story, so it’s her version of what happened, and then the second act is the truth.

Sanville: I’m a big fan, a big sucker for second chances, redemption. It takes a long time to figure things out sometimes, and if you get another chance…I guess it’s worth writing a play about.

I imagine that as an actor you approach every new role with a mix of curiosity and excitement, but also trepidation.

Makes perfect sense to me.

Ragland: I didn’t have a great time in high school. I was, you know, “the world revolves around me, and I have all the answers, and know all the answers but nobody’s asking, and I’m not telling.” So I can relate to Ellie sometimes a little too well. It’s a little scary to go back when you’ve grown beyond that. I really like the way Zolidis has written this play, the way he’s letting actors portray the high school kids and then themselves as adults. In a lot of plays they’d double cast it; they’d have kids come in and then you’ll play the older version. For people like Rusty (Mewha – who plays Miles) and me, that kind of ingénue, that innocent kid stuff, that’s kind of gone for us. I’m way too ballsy to go back and play Juliet, you know? That’s generally gone after a certain age, and for a certain type of actor. In this play we get to still do it. That’s really interesting and intriguing.