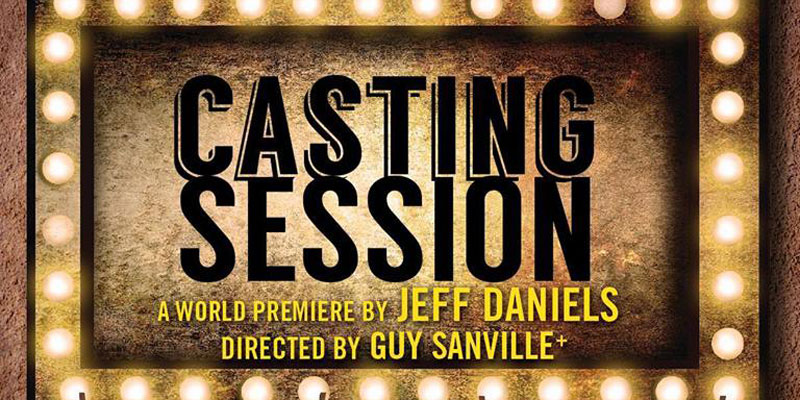 Jeff Daniels’ latest play, Casting Session, will have a world premiere, and will also open the Purple Rose Theatre’s 25th season on September 17th and will run through December 19th. The comedy is about a couple of middle-aged actors who have been competing for roles in New York for more than three decades. We spoke with Guy Sanville, the Purple Rose’s Artistic Director, who will direct this production, on the first day of rehearsals, five weeks before opening night.

Sanville: It’s about the resilience of the human spirit, it’s about not giving up, it’s about relentless pursuit of one’s passion, it’s about these two guys who have been each other’s nemesis for thirty years.

Current: Some people feel that competition belongs in business and sports but not in the arts.

Sanville: Pardon me, that is baloney! Any professional actor, anybody who’s been doing this for a while, will tell you that acting is the most competitive field in this country.

Current: So many actors, so few roles.

Sanville: Exactly. We have two million lawyers in this country. Now let’s say that our definition of a professional actor is somebody who has earned a minimum of $8,000 a year for ten consecutive years. $8,000 a year for ten consecutive years and you can call yourself a successful actor. In a country with two million layers, how many actors do you think there are, using our definition of a successful actor?

Sanville: Less than three thousand. And that includes Jeff Daniels, that includes a couple of people in this building. That’s how competitive it is. And competition is healthy; when you’re acting in a scene you want something, you want the other person in that scene to do something and they don’t want to do it. Or they want something from you, that’s just good drama.

This play is about something, and it’s also hilarious. You know these guys, they’re fifty or sixty years old, their ship hasn’t come in—whatever that means—and they’re still pounding the pavement, still wearing the same audition clothes—the same suit that they wore fifteen years ago—and good for them if it fits. So there’s a desperation there, and yet an attempt to conceal it, that can be really funny and heartbreaking. Like all good comedy, it’s both.

The play is written with such great rhythm. I don’t spend a lot of time at the table in rehearsal. I like to get up and work, because I think fifteen minutes on your feet is more important than three hours sitting around a table talking about stuff. But we are gonna spend a couple of days just sitting around the table (here Sanville starts snapping his fingers rhythmically) just getting that rhythm down. Because Daniels is a great musician and songwriter and he writes with great force and great rhythm. It’s gonna be fun.