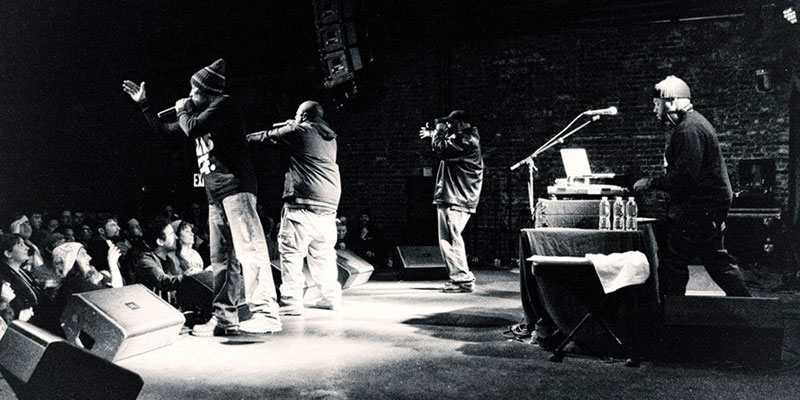 Blackalicious, made up of DJ/Producer Chief Xcel (Xavier Mosley) and rapper Gift of Gab (Timothy Parker), is back with their first new album since releasing the critically-acclaimed “The Craft” in 2005. Known for Xcel’s classic beats and Gift of Gab’s fast-paced, playful lyrics, the duo have been making music together for over two decades. On their latest effort, “Imani Vol. 1,” due out September 18, their comfort with one another shows.

Funded entirely through a Pledge Music campaign, “Imani” (which means faith in Swahili) is the first part of a trilogy the group has planned. Influenced by Gift of Gab’s search for a kidney transplant while undergoing dialysis and the duo’s desire to reconnect with their fans, “Imani” was about three years in the making.

Tuesday, before their show at The Blind Pig, which included special guest Lateef the Truthspeaker, I sat down with Chief Xcel to talk about the new album, the climate of hip-hop, the recognition they got after Daniel Radcliffe rapped their song “Alphabet Aerobics” on “The Tonight Show,” and advice he has for young artists just getting started.

You guys have been on the road about a month now?

“It’s been about three weeks. We’re out until the end of November.”

How’s the tour going? There was obviously demand for new material, but do you feel like you’ve been able to reach a new audience?

“Yeah, there is always new people. Our hardcore fans always tend to bring out new people, so there is that element of it. And then there’s the whole “Tonight Show” element of it. A bunch of new people have kind of been introduced to the music via that as well.”

Since you bring it up, I’ve got to ask. When Daniel Radcliffe did that; was that a sign that there was a craving for new music from you guys?

“It was really unexpected man. It was surprising. Pleasantly surprising. It’s funny because we had been working on the record like a good year and a half, two years prior to that even happening. So it’s almost like a synergy kind of a thing. So for that to happen was really cool. Then to get out here and see people’s responses, both live and online to the new music, has been cool. Sharing it with people is what we do it for in the first place.”

You guys have been making music together now for almost two decades. What’s been different about your working relationship?

What was the decision behind crowdfunding the new album?

“It really came about from us going through our warehouse and going through all of this like really dope memorabilia that we had. We feel like we live in a time where music is so intangible, because you can get it instantly online and whatnot, the specialness of the physical nature of things is lost. Those rarities, those rare items. So we really did the pledge music thing as a way to share really special items with our fans. Really at a bargain, at a discount. We practically gave a lot of that stuff away. But again, it was for them. You’re going to get that rare “Nia” poster, that there might have been only 20 copies made on the entire planet. Once it’s gone, it’s gone.

It really gave us a chance to marry the specialness of the physical world and the physical nature of music with what’s happening with technology and our ability to get it to people.”

I’m struck by the contrast between Nia, which means purposefulness –

Purpose, right, and this new album, which means “faith”. Nia was your first major album, and it seemed like more of a declaration, a statement. Is this new album more reflective, or personal?

“No, it wasn’t a statement album. Each one of our records just tend to be snapshots of what’s going on in our lives at the time. So that’s what Imani is – it’s just a snapshot of where Xavier and Tim are in our lives, you know?”

When you guys started out in the 90’s, and even when “The Craft” was released, it was a much different time in hip-hop. Would you say that there is more room in today’s hip-hop climate for the kind of positive, playful work you guys do?

“I think we’re at the point in our career where we set the pace as opposed to move along to it, you know what I mean? We spent our career kind of carving our own lane so now it’s like we kind of feel like we’re in pole position. We’ve never really been that kind of group that have been driven by external forces. It’s always been internal and that’s what I think ignites people’s affinity towards our music. It’s just that; we do us.”

You mention it’s the internal forces that really drive you. I don’t want to make you speak for him, but in terms of Gab’s health issues, how much of that is reflected on the new album?

The material for all three albums; is that done already?

“Pretty much. We’re always, always working and fine-tuning, until the last day I have to send stuff off to be mastered and manufactured. But Volume 2 is probably a good 70 to 75 percent in the can. We got a good force of wind in the sails right now.”

We focus a lot on young, local artists here in Southeast Michigan. What advice would you give to young musicians coming up?

“Develop your voice, you know? Study. Study, study, study. Be diligent in your craft. Hone your craft, but hone it with the intention of developing your voice in that process. If you do that, you can’t go wrong. You never know where the winds of time are going to take you, but you stay true to that then wherever you end up is going to be cool.”