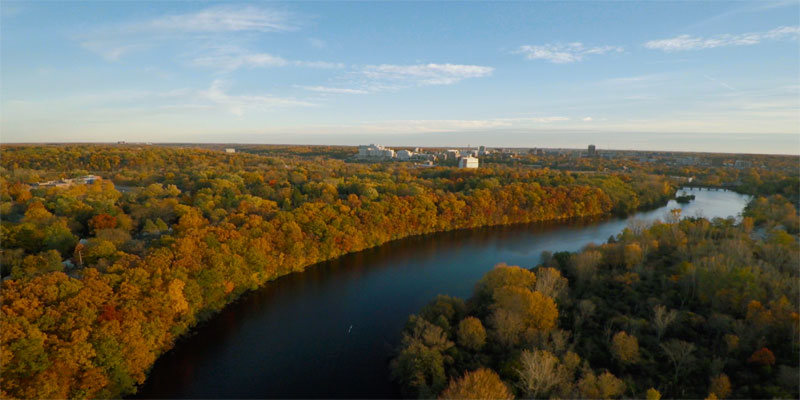 Rob Ewing, the principal realtor at Ewing Professionals, wants people to know that he’s focused on celebrating, not just selling, Ann Arbor. He is producing a video series to share the spirit of the community.

The latest video in the series, “Along the Banks of the Huron”, features breathtaking imagery of the Ann Arbor parks system as well as interviews with Colin Smith, Manager of the City of Ann Arbor Parks and Recreation Department, and Al Gallup, the son of famed Ann Arbor Parks Superintendent Eli Gallup.

“Some people would think, ‘why would I produce a video that isn’t about me?’ But this type of thing (covering the spirit of the community)  is relevant to many more people,” said Stephen Ewing.

People in Ann Arbor truly care about their parks system, but how familiar are they with the history that took place right here? With spring around the corner, here’s a little test about the history of Ann Arbor parks. It’s time to get excited about exploring the outdoors here in town.

The quiz questions were compiled by Stephen. His production company, Digital Agent, produced the “Discover Ann Arbor” and “Along the Banks of the Huron” videos, with Stephen doing all of the filming, interviewing, and general legwork.

Answers:  1.) Ann Arbor’s two moraines are the Defiance moraine and the Fort Wayne moraine. 2.)Approximately 1,400 square feet of park space per citizen 3.) Royal Copeland, George Burns, David Allmendinger, H.W. Douglas, and Levi Wines  4.) Hanover Park 5.) The Olmsted Brothers company, formed by John and Frederick Olmsted Jr. The brothers helped form the National Park Service and designed many well-known parks and campuses, including the University of Notre Dame. Their father, Frederick Olmsted Sr., along with his partners, designed Central Park in New York. 6.) Eli Gallup 7.) Burns Park used to be the site of the old County Fairgrounds. 8.) At a memorial to the race track that once stood in its place 9.) “The Rock” is a chunk of Canadian limestone from Olson Park. It was originally placed in 1932 in celebration of George Washington’s 200th birthday. 10.) West Park