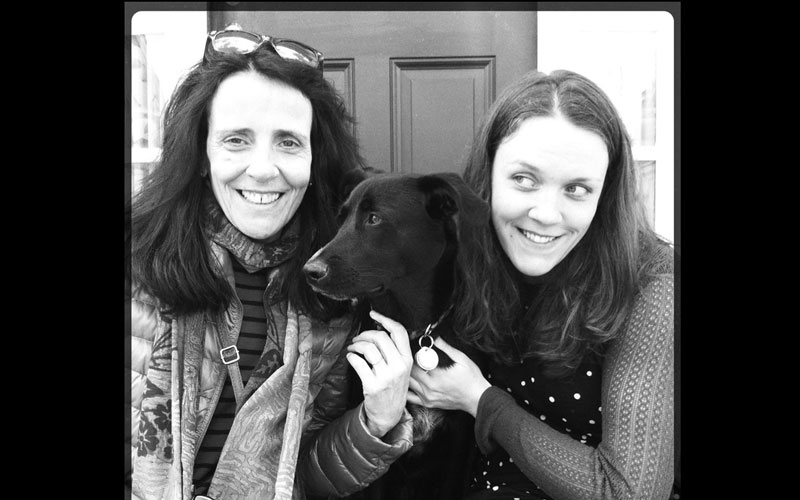 For someone who comes from folk music royalty, it seems like a given that Lucy Wainwright Roche would become an accomplished singer-songwriter. The daughter of Loudon Wainwright III and Suzzy Roche of the cult group, The Roches, Lucy is now a celebrated musician, with two critically acclaimed full-length studio solo albums under her belt.

But her career in music was far from a sure thing. After getting her Master’s in education, she taught elementary school in New York City before joining her brother, Rufus Wainwright (a well-regarded artist in his own right), on tour in the mid-2000’s.

Now touring with her mother, Suzzy Roche, in support of their collaborative effort, Fairytale and Myth (2013), we chatted with the award-winning folk artist about how she stumbled into a career as a recording artist and the accidental record she made with her mom.

Zach Marburger: Are you looking forward to coming back to Ann Arbor?

Lucy Wainwright Roche: Are you going to ask me about Zingerman’s? (laughs)

LWR: I have been known to drive out of the way on tour to go to Zingerman’s. It’s hard to find food to take in the car, so a good sandwich can go a long way!

ZM: What’s your experience performing in Ann Arbor been like?

LWR: I went to Oberlin (college) in Ohio, so we used to drive up to Ann Arbor just to be somewhere else. I love the Ark. I’ve opened for people many, many times there. I travel a lot with my dog and there are great dog parks there too. There are just certain places on the map where you don’t mind stopping.

ZM: Tell me about the latest album you made with your mom. It started from leftover tracks from you solo album, There’s a Last Time for Everything, is that correct?

LWR: I had made my old solo record and we decided to make a recording to use as a fundraiser and we did a couple of tracks for that and it sort of developed into a full-length record. It’s been out a while now, and it’s kind of a combo of folk songs my mom wrote and cover songs. The cover songs are just songs I’ve always liked and wanted to learn.

It was a really low pressure and enjoyable project. We made it with a friend of ours, Rob Morsberger, who was really ill at the time. He had brain cancer and it was the last record that he made. He played piano on it and made all the arrangements. So it was kind of an accidental but very special project that sort of appeared out of nowhere.

ZM: Is there a sense of melancholy around those songs and this album then, or is it nice to know that you made these songs with Rob and now you’re out there sharing them?

LWR: It was certainly a bitter-sweet process making the record with him. But we laughed a lot and had fun, and mostly we played guitars, and he added another dimension by playing piano. The piano is really the backbone of the recording. He kind of gave us a great gift of making this record together, which we never really planned to do. There was definitely sadness about it but it was also a pretty enjoyable experience too.

ZM: You’ve been performing with your family for a long time now, but in terms of making this record with your mom, was that an eye-opening experience for you?

LWR: It was really fun and easy. That’s the thing about us doing shows together; we’re really lucky, because for the most part it’s pretty easy. I used to tour with my mom when I was a kid and she was on tour with The Roches and so we’re kind of used to traveling around and being in hotel rooms. So it works pretty well. A lot of the time I’m on the road on my own so it’s a nice change of pace. It makes things a lot funnier. When you’re alone and things go wrong on the road it’s really not that funny, but when someone is with you it’s a little more funny.

ZM: Do you blame your brother for sucking you back into the family business?

LWR: Every once in awhile. But mostly I think it was a good thing. He’s been incredibly open and generous in my career. I hadn’t planned on doing this at all, and there are certainly days where I wonder what I was thinking, but for the most part it’s been pretty enjoyable along the way.