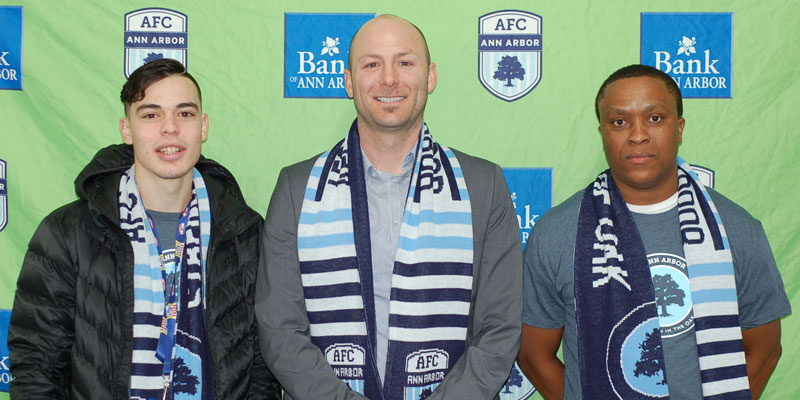 It can be difficult, living in Ann Arbor, to find sporting events outside the orbit of University of Michigan athletics. But despite playing their home matches in the shadow of The Big House, the AFC Ann Arbor Mighty Oaks are making a point of getting high-quality soccer that isn’t affiliated with the Wolverines to local fans starved for another team to cheer on.

Founded in 2014 by a group of locals with a desire to see soccer flourish in Ann Arbor, the club has big plans for 2016. Heading into just their second season, the team has joined the National Premier Soccer League (NPSL), where they’ll compete in the Midwest Region. The NPSL is sanctioned by the United States Soccer Federation and competes in the fourth division of the United States soccer pyramid.

While their players are semi-professional or amateurs, the step up to the NPSL means that the quality of play is improving according to Sporting Director and Head Coach Eric Rudland, as the team cobbles together a roster of players from around the world.

“Our roster is comprised of ex-professionals, guys who have played in the MLS who are now local guys,” said Rudland. “We’ll have college players playing for us in the offseason, and we’ll have international players coming in who want to use our program as a stepping stone.”

AFC Ann Arbor also provides unique opportunities for players, who may have slipped through the scouting cracks, to get noticed, chances that occur with a team just now forming a real identity.

“Because our season is only 12 weeks, it’s hard to develop a player over the course of three months. What I like to do is identify players that have maybe flown under the radar or maybe had a couple hard knocks and may have missed an opportunity to sign a pro contract,” said Rudland. “My hope is that I can identify those players, have them come in with us and give them that platform to have success. I just think there are so many good players out there that for whatever reason, they all just don’t get their crack.”

Rudland’s unique background makes him ideally suited for building a roster from scratch. Rudland coached in Europe for Crewe Alexandra FC (part of the English Championship Division) and at Spring Arbor University, an NAIA school. Most recently, he coached Lansing United in their first two years of NPSL competition to a MidWest Regional Title and a chance to compete in the NPSL National Semi-finals.

In his second go-around at helping a team get off the ground, Rudland would love to see this team compete for a conference and regional championship. Just as important is seeing the growth of the game in Ann Arbor and neighboring communities.

“There’s no other country in the world where the top level of soccer is growing the way it is (here). Just in Michigan, there were two teams four years ago, three teams three years ago, and now all of a sudden we’ll have six teams in Michigan (in the NPSL),” said Rudland. “From a community standpoint, from an overall soccer standpoint, it’s fantastic.”

AFC Ann Arbor will play a friendly against
Northwood University’s Men’s Soccer Team Saturday, April 23 at 7pm
before kicking off their regular season
Friday, April 29 at 7pm against Oakland County FC.
All home matches are at Hollway Field at Pioneer High School.
For tickets and more information, visit afcannarbor.com.