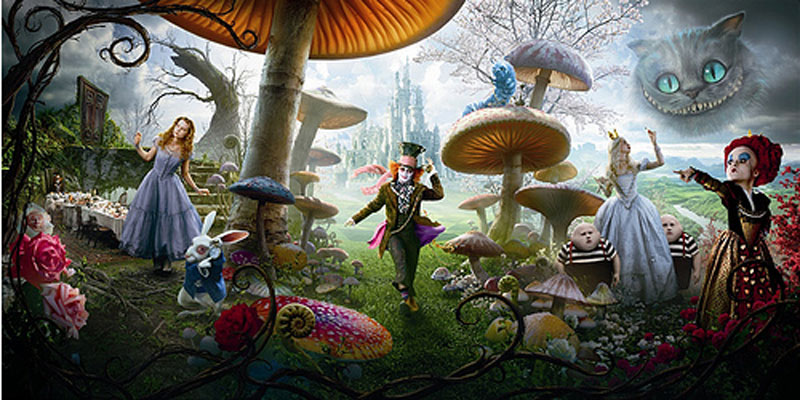 It’s been 150 years, but Lewis Carroll’s Alice in Wonderland remains as popular and influential as ever. In fact, interest in the classic children’s tale is even growing, thanks to countless reproductions in film, the latest of which, Tim Burton’s adaptation starring Johnny Depp, came out in 2010.

Originally titled Alice’s Adventures Under Ground, and inspired by a rainy July 4th day rowing on the Isis, Carroll first wrote the tale for Alice Liddell, the daughter of his friend Henry Liddell, with whom Carroll was living with at the time. The expanded edition – despite mixed reviews – was an immediate hit with adults and children, and has become the gold standard for both children novels and the genre of literary nonsense. A new generation was introduced to the story thanks to Disney’s 1951 classic film adaptation.

Nor is film the only medium in which artists are still inspired by Carroll’s work. Countless comic books, graphic comics, and artwork has been produced around the original novel – and now Ann Arbor can go down the rabbit hole along with Alice thanks to a couple of popular shows celebrating the story’s anniversary. These events showcase the story in a whole new light – from modern retellings and new novels to strange new imaginings and pop-up artwork. Don’t miss these chances to revisit Wonderland and get reintroduced to the White Rabbit, the Mad Hatter, and more.

Coming November 6 is the Brass Tack Ensemble’s, Eat Me: Alice’s Adventures in the Working Class, written and directed by Isaac Ellis. This reimagining of Alice adventure puts Alice in the modern corporate world. After undergoing a mental breakdown, Alice must navigate her way through the business world, interacting with characters around the office inspired by some very familiar characters.

Since 1999, the Brass Tacks Ensemble has been dedicated to providing audiences with a bare-bones approach to theater that focuses on what they feel is most important: a clear, well-told story minus the directorial flourishes that muddle other productions. Now, they invite all audiences to experience Wonderland in a whole new light. Production does contain strong language and may not be appropriate for children.

Going on right now, through December 17, the Special Collections Library at the Hatcher Graduate Library is displaying all things Alice as part of their Curiouser and Curiouser: Exploring Wonderland with Alice exhibit.

Featuring award-winning work like Oleg Lipchenko’s book Alice – winner of the Elizabeth Mrazki-Cleaver Canadian Picture Book Award – this exhibit explores Alice and her friends in a variety of mediums and in ways most people aren’t familiar with, even if they’re fans of the original tale (or simply the Disney adaptation). The start of the exhibit also includes other childhood literature that pre-dates Alice’s Adventures in Wonderland in order to show how Carroll himself may have been influenced.

“We’re trying to show the story of how Alice's Adventures in Wonderland developed chronologically,” said said Juli McLoone, who co-curated the exhibit along with Jo Angela Oehrli. “From the precursors in the first case to some of the most recent innovative illustration styles and covers towards the end of the exhibit.”

The highlight of the exhibit, however, is an original 1865 first edition of the novel. After an initial printing of 2,000 copies, Carroll requested that the entire run be recalled because of quality concerns. A new impression was finished in time for the Christmas shopping season, with illustrations by John Tenniel. This British version, according to McLoone, actually came out before the first American version – but in an interesting historical twist, the American edition featured the recalled pages, pre-dating the pages used in the first publishing in Britain.

Tidbits like that are just part of the reason why the exhibit makes an interesting afternoon for fans of Carroll’s best-known work. The exhibit is open 10am-5pm Monday through Friday, and is free to the general public.