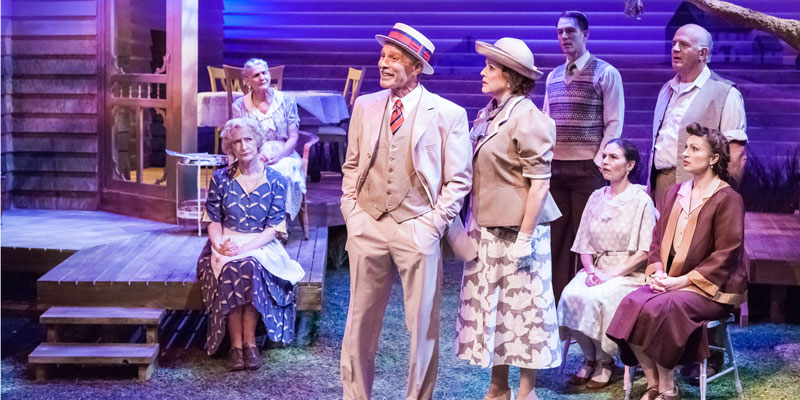 The Purple Rose Theatre’s summer production, Paul Osborn’s Morning’s at Seven, is a play about four aging sisters, three married, one not, all living in a small Midwestern town. The title comes from a line in a Robert Browning poem that ends, “Morning’s at seven…/God’s in his Heaven/ All’s right with the world!”

Michelle Mountain, who has appeared in many Rose productions, including the most recent, Gaps in the Fossil Record, will direct, and Richard McWilliams, who starred opposite Mountain in last year’s Annapurna, assumes the role of Thor, the patriarch of the family. We sat down with the pair to talk about the next production.

Current: The play is set in the late 1930s, after the Depression and before the Second World War. And the last line of the poem that the title comes from is, “All’s right with the world!” You know it’s not taking place today!

McWilliams: Today you can move around, you can go wherever you want very quickly, but that doesn’t exist in this story.

Mountain: Arry, the unmarried sister, has lived with her sister practically her whole life…these four sisters live within a block and a half of each other.

Current: There are two contradictory things going on in the play. It’s about making room for everyone, making sure everyone has a place, but there’s also this longing to have your own space.

McWilliams: It’s what people expected in those years. You expected families to stay together, so then when you say to someone, or say to yourself, “I want my own space,” then not only is it a surprise…

Mountain: It’s kind of like an earthquake. This is a gentle comedy and it’s very funny, but it’s also kind of wonderfully heartbreaking.

McWilliams: I think it strikes a chord. It’s not that far removed [from today]. You hope that those kinds of genuine connections still exist. When I read it, there is just a very peaceful feeling that comes over you that you’d like to keep. For me the play is about a simpler time and about compassion for people in your neighborhood and in your family.