Draft-dodging, donuts and a second chance 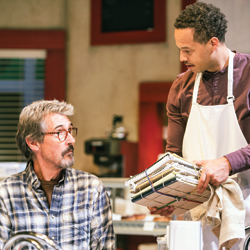 The opening play of the Purple Rose Theatre’s 2012-2013 season is Tracy Letts’ “Superior Donuts,” the play that followed Letts’ “August: Osage County” which won the Pulitzer prize in 2008. Randy Mantooth, perhaps best known for his work in the long running 1970s, “Emergency!,”portrays an aging 60s former draft dodger who now runs a donut shop in Chicago. I spoke with Mantooth and Guy Sanville, the Purple Rose’s artistic director, who is directing Superior Donuts.

Tell us about the play.

Sanville: This script, the deeper we get into it, the more incredible it is. It’s a really great piece of writing. This play has a lot of heart in it. So did August: Osage County. This play doesn’t have incest in it! [As that one did] (Laughter) I think Mr. Letts wrote this one from the heart. It’s good heart. It’s not stupidly sentimental. It’s a play about a guy who finds the courage to become a friend. There’s a sweetness to it and a lot of heart. It’s easy to dismiss that as light. He did try to write a comedy here, although I laughed my ass off at August: Osage too. He’s also said that he wanted to write a play about Chicago, where he’s lived for 20 years. In many ways this play is a love letter to Chicago.
Mantooth: His descriptions show that he not only knows the history of Chicago, but he also has this real fondness for it and that comes out in the dialog every time. The play shows the dark side of Chicago as well. It exposes that.

Superior Donuts takes place in the present, but your character, Arthur, grew up in the Vietnam era, right?

So this role hits pretty close to home for you.

Mantooth: I think for anybody our age it will hit very close to home, because they will all sit there and go…

There but for the grace of…

Mantooth: Yeah. Arthur had hope as a kid. He had to have had hope as a kid; otherwise, if he hadn’t had hope, he’d have gone to Vietnam! But he paid a dear price for making that decision, to not go.
Sanville: Arthur has been called a coward his whole life, and then he has to choose whether or not to fight for something.

He’s getting a second chance?

Sanville: I think it’s very much a story of redemption. It’s one of the things that appealed to me. I love stories about second chances.