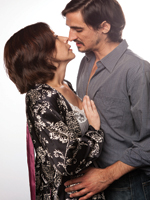 The Pulitzer Prize winning playwright Lanford Wilson’s 1987 play, Burn This, is the Performance Network’s summer presentation, running from August 2 – September 2. The action of the play is set in motion
by the death, in a boating accident, of Robbie, a young gay dancer. Burn This is peopled by Robbie’s roommates, Anna, also a dancer, Larry, an advertising executive, Anna’s boyfriend, Burton, who has repeatedly proposed to her, but to whom she has not been able to commit. Bursting into this group comes Pale, Robbie’s older brother.

Ray Schultz, who will direct Burn This, his third show at the Network, talks about the play.

I think it’s a play about people trying to connect with one another. The characters are either dealing with grief, or questioning where they’re going in their lives, either personally or artistically, and because of that they’re trying to reach out to one another. The play takes place in New York in the 1980s and it was a time during the Reagan era when a lot of artists were questioning many things; is my art really art or is it an economic enterprise? How much freedom can you have artistically in a society that seems to be veering more towards consumerism?

Do you think these were issues with which Wilson himself may have been struggling?

It’s hard to say when or how much, biographically, a play is about a writer. Wilson was always very guarded about details of his personal life. But I’ve always gotten the feeling that the play is very personal for him.

Robbie has just drowned, but it seems that all of the characters are…

…already sort of adrift. Robbie’s death is the catalyst for all the characters’ questioning where they’ve been and where they’re going. Especially Anna, because she’s a dancer in her thirties, her physical prime is over and she’s moving into wanting to be a choreographer. Her boyfriend, Burton, is a writer also questioning the direction his writing is going. The characters are not quite old, but they’re not quite young anymore. They’re moving into some kind of maturity. Pale, Robbie’s older brother is a very, very volatile character. He’s sort of blue collar, he’s the non-artist in the group, but he’s very perceptive and sensitive. At the heart of the play is a love story that’s really touching in that it’s two people, Anna and Pale, who are very attracted to one another, but are very different, and coming from very different places, and it takes them a long time to come together. The mix of all of these people makes for a fascinating evening of theater.