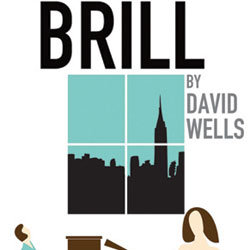 Brill is billed as a comedy with music. Written by Ann Arbor playwright, David Wells, with music by local rock icon, Frank Allison, of Odd Socks fame, the play takes place in the renowned Brill Building in Manhattan, once the epicenter of pop music, where musicians could find a publisher, cut a demo, and make a deal with radio promoters—all in that one building. Set in 1959, the story follows a Big Band songwriter trying to come to terms with the advent of rock ‘n’ roll, and also with the young woman who walks into his office, and life, with her guitar. Brill received raves from audiences at the Network’s Fireside Festival, where it was workshopped a year ago, and stars local theater veterans, Phil Powers and Sarah Leahy. Powers is intrigued by Brill’s setting. “Once we Americans figured out that Russia wasn't going to turn us all into Communists, we exhaled to Bill Haley and the Comets. The music that Frank Allison has put together for Brill is wonderful stuff. Frank and I went to school together and to play his music is both an honor and a pleasure.” Performance Network Theater, 120 E. Huron.