Opening of Pointless Brewery and Theatre 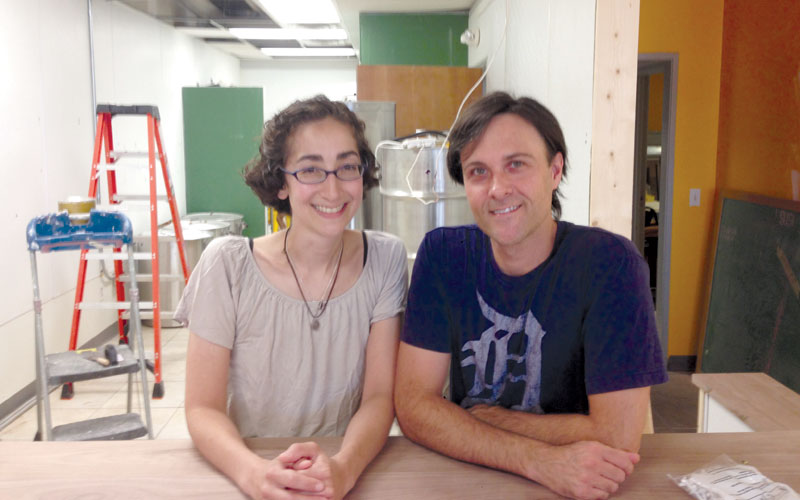 The opening of Pointless Brewery and Theatre from couple Jason and Tori Tomalia will offer an unusual combination—improv comedy and craft beers brewed on the premises. Improv comedy and beer are usually associated with fun and light-hearted times, but Pointless grew out of a pretty dark period in the Tomalias’ lives.

Laughter is the best medicine

In May of 2013, after getting mysteriously sicker and sicker, Tori received a diagnosis of stage IV lung cancer—grim news for anyone, but perhaps especially so for parents of three children under the age of five. The chemo treatments were brutal and, as they recount, at one point Tori said to Jason, “What if I go through all this, and it still just ends up awful? Everything just feels so pointless.” Jason responded, “Okay, maybe everything we do is pointless. So let’s do this. Let’s open a pointless brewery and theatre, and make our pointless dreams come true.” The young couple, who have many years of theater and beer brewing experience between them, had long been planning to open a place like this at some point in their lives; clearly the time was now.

“We’ll definitely be a theater that brews beer, rather than a brewery that has a stage,” said Jason. “We want to be a home for long form improv. Short form improv is game based, ‘Whose Line Is It Anyway?’ kind of improv. Long form improv is scene based; you get a suggestion and then you create the world and anything can happen within the scene, and you connect scenes together to form a show.”

Tori added, “We’re sort of upending the theater experience, you can grab a snack, grab a drink, have a seat and watch at the same time.” That’s not uncommon in the improv theater realm. It’s looser than having to just sit while the action happens in front of you.

Pointless will be open Thursdays through Sundays with shows on Fridays at 8pm and Saturdays at 8pm and 10:30pm. “We’ll have our League of Pointless Improvisers, our resident company,” said Tori. “And they’ll perform in every one of the shows, but there also will be slots for guest artists, groups from the area coming in. We’ll have three each night, the League and two guests.”

Not just for adults

Pointless will also offer something to people too young to enjoy their beers. Tori, who has a Master’s Degree in Applied Drama and Theater for Youth, will be in charge of their children’s series. “There will be groups from the area coming to perform, as well as what we’re calling ‘The Playground,’ which will be arts workshops and games that kids can come and play.” Jason and Tori plan to eventually also add Sunday afternoon concerts, an open mic, sketch comedy, and classes for adult age improvisers looking to learn the craft.

Of course, they will be offering their unique craft beers. “I really fell in love with the whole process [of brewing],” said Jason. “And wanted to learn more and more— just brew everything I could.” And eventually they saw the connection between brewing beer and improv comedy. “Philosophically they’re kind of similar,” says Tori. “What if you tried some of this? And you never know,” said Jason. “They both come from this realm of a basic form or structure or recipe, but it’s all about what you bring to the table, whether it’s an improv group or a brewer; it’s what can we do with these basic ingredients to make it something different.”

Today, Tori’s treatments are holding the cancer at bay. “I get nervous saying that,” said Tori. “But it’s going super well.” Her energy level is nearly back to where she was before her illness hit, and the couple is excited to introduce Pointless to the area. “Community is a big part of it for us,” adds Tori, “We want to make it really welcoming for everyone, a creative space in which to feel welcomed.”