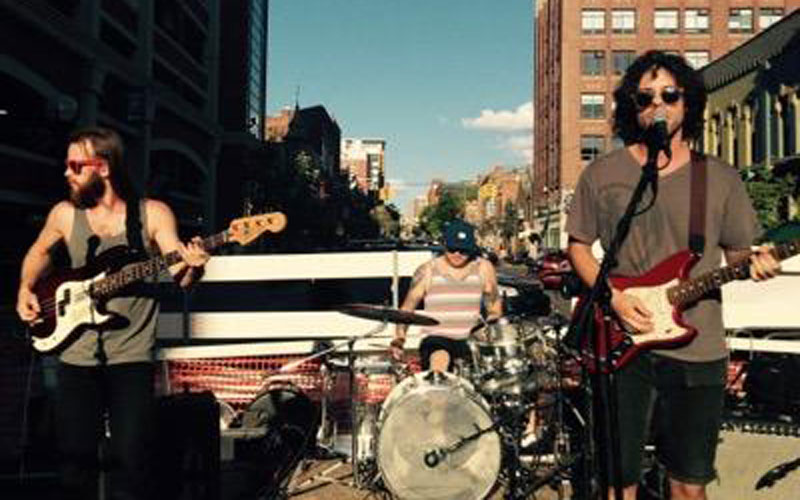 Too often, when it comes to music, we wear blinders, pointed forward, ever eager for what’s next.

It’s a troubling what-have-you-done-for-me-lately trend we unconsciously embrace. Here we are, at the start of a new year,  revving up for a weekend’s worth of album release parties or sneaking streams of the newest singles from local bands. I know the carousel’s about to swing us around through another twelve months. But before we hop on the ride, let’s take this page to look back at some of 2015’s local music highlights — from local artists making waves to the best concerts and festivals Washtenaw County had to offer.

Detroit based psychedelic-trap-pop trio Jamaican Queens headlined one of the Mittenfest nights and then went on to release an EP and a full length called Downers. In fact, a slew of Detroit artists were able to break into the Ann Arbor market with last year’s Mittenfest, including names like Tunde Olaniran and Flint Eastwood (who each released a pair of game-changing records, respectively titled Transgressor and Small Victories), along with Casual Sweetheart and Double Winter (both featuring integral members of the Seraphine Collective, a community-bolstering/feminist-inspired music collective that also includes locals like Rebel Kind). Ypsi-duo Junglefowl had one of their first shows in early January at the Crossroads and went on to release their potent debut EP, Strut.

Singer/songwriter Timothy Monger played an intimate show inside the Ann Arbor District Library almost a year ago. Monger spent the summer of 2015 working on what will be his third solo LP, coming later this year. The Ann Arbor District Library synced up with the music scene in other ways, too, with Electronic Music Production Workshops as well as assisting songwriter/producer Dave Menzo with an album produced exclusively using equipment he checked-out with his library card.

Matt Jones took his epic River Street Anthology into high gear in 2015, welcoming up to 150 musicians into his basement (or meeting them at their own spaces) to record a live performance of a song for posterity. Jones (who fronts The Reconstruction) has hopes of getting the dang thing into the Library of Congress, but let’s just hope the anticipated compilation comes out, somehow, in some way, before summer! Michigan-based Fred Thomas released one of his most mesmerizing and emotional albums of his career, the critically acclaimed All Are Saved.

First Fridays continued to bring some artful radiance to downtown Ypsilanti during each month’s opening weekend. We saw a lot of venues, restaurants, bookstores, coffee shops, and other “unconventional spaces” welcoming bands in for more makeshift performances. This alt-venue-stimulation/utilization was particularly on display during 2015’s YpsiArboroo (curated by local songwriter Chris Anderson).

Ypsi and Ann Arbor bands like Child Sleep made more inroads into the Detroit market with spots on the lineup for the revered (and somewhat rogue-ish) Hamtramck Music Festival. Soul singer Alexander Lynch had his debut release. The Ann Arbor Summer Festival provided us with a staggering variety of performers, both local and touring, outdoors in the heart of downtown. The Water Hill Music Festival, though smaller in scale, had some equally enlivening performances from local artists, including Current favorites like Wych Elm. FuzzFest, meanwhile, was pretty massive this year, with a balance of Detroit, Ypsi, and Ann Arbor bands, including Buffalo Coven Party, Wolf Eyes, Blue Snaggletooth and several more distortion/FX-heavy rock ‘n’ roll bands.

The Landmarks performed as The White Stripes during another scene-splicing event called “Detroit X Detroit,” and just released an album in mid-November. Speaking of fresher music news, Vulfpeck was featured on The Late Show with Stephen Colbert around Thanksgiving.  And, while I mentioned Tim Monger currently finishing up something, you should also keep your ears open for The Electric Six, who should have a new album ready in the near future.

Visitors from out of town

I almost forgot that PING PoNG and Walk Your Bike put out new albums. Frontier Ruckus is looking toward a springtime release of an album they finished last September down in Nashville. MusicMATTERS welcomed Common and Chris Dupont put out his best record yet, called Outliers.

And, on a very heartening and inspiring closing note, a bevy of local musicians came together last August for Misty Lyn Bergeron, a locally beloved singer/songwriter who was in a major car accident last year. While she recovered, several singers stepped up and performed cover versions of her songs at a special gathering as a sign of how much her music, her lyrics and her overall radiant personality means to this community.

It was a fantastic year for music; I’m sure I left out events and releases. Just keep your own ears open because so much is happening around this music scene. All I am saying is ‘don’t fixate so much on the future’. It’s worthwhile to take a breath and re-spin an album from that stellar band. Play it again.