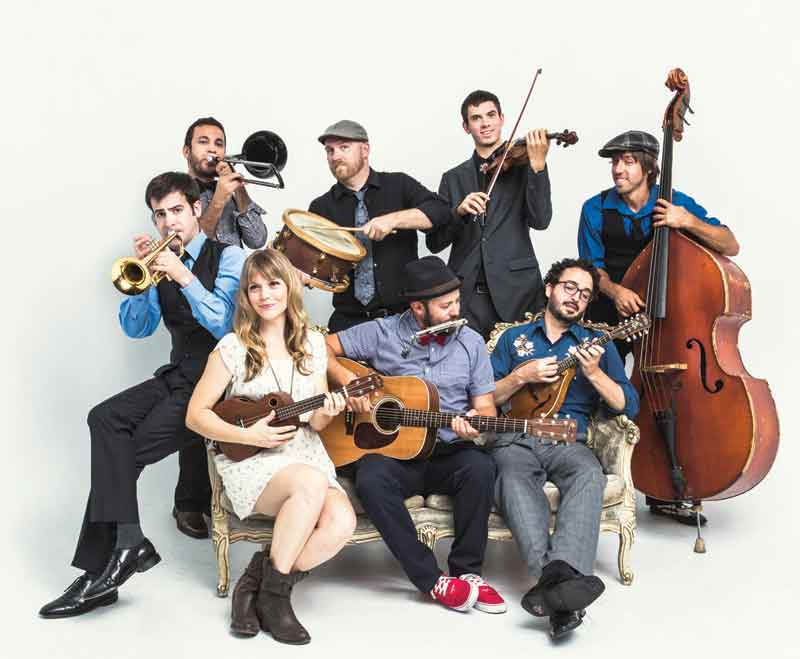 Going to a Dustbowl Revival show is like diving into a dense musical encyclopedia. The west coast collective’s eight talented players bring a range of eclectic instrumentation to the stage, conjuring up an old world sound in a new world setting.

And it all started here in Ann Arbor. Sort of…

The Dustbowl Revival’s singer/guitarist/founder Zach Lupetin is a U-M grad and cut his teeth gigging around The Blind Pig and the Canterbury House. The band released their second album, Carry Me Home last year. Their third album will be a collection of live recordings from a few prominent concerts (including songs from last month’s performance at L.A.’s Troubadour).

So this will be somewhat of a homecoming for you. Can you talk about Ann Arbor and its influence on your development?

Zach Lupetin: Playing at Hill is going to be a huge thrill for me. We played the Ark a few times and it’s always been magical, but this is our first time playing the Ann Arbor Folk Festival. I formed my musical backbone in Ann Arbor, playing in a blues band called The Midnight Special. I was lucky enough to come into contact with very talented musicians from the jazz school and they opened up my consciousness to a lot of different music that I would not normally have  listened to. Playing around this community in college was really great. So many intelligent people from all over the world made that small town feel very cosmopolitan with exposure to new music and art. I loved my time in Ann Arbor.

You seem keen on engaging with the crowd. There’s necessity for energy, not just what you all give, but what the crowd gets, right?

Even early on when we played dive bars, the main goal for me was to create a musical experience that brings people joy and enthusiasm. Traditional American music, like bluegrass and jazz, sometimes, can be very stoic. And that is not what we do. We encourage people to get up and dance and there’s this musical conversation with the audience. We really go all-out at each show and try to one-up each other. People gravitate towards certain kinds of music. Certain things that become your trademark, your thing, for some people it’s rock or reggae or rap, but for us it’s making new American standards that have a timeless Americana-sound.

Besides an endearing timelessness, what drew you to this blend of styles, old swing-jazz and boisterous bluegrass?

Sometimes, I think it’s almost like a past-life sort of thing. Maybe some of us were in old big-bands back in the ‘30s in another life in New York and we woke up one day and it started sinking in, as a kid playing music in bars, who knows?