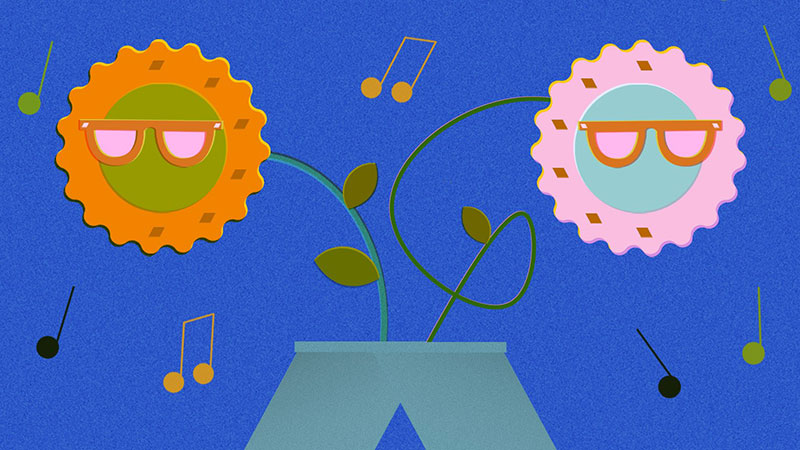 Hey everyone. I feel like “What a time to be alive…,” has now replaced any/all small-talk. It has probably replaced “Hello.” I, and everyone here at Current, want to wish you well–sending all the good vibes of health and safety your way, as well as hoping you can find a sense of peace amid all this surrealism. Perhaps it goes without saying that now, more than ever, we need something like the escape and the enlightenment and the meditation of MUSIC.

Today, we’re thinking about our local artists and how hard of a hit their livelihoods will be taking in the months ahead, with venues canceling shows and tours being postponed.

With those sizable revenue sources drying up, Bandcamp has taken the initiative to waive its revenue share of any sales of purchased downloads THIS FRIDAY, March 20th, from midnight-to-midnight, Pacific Time. That means that the songs you’re downloading this Friday will put much-needed money directly into artists’ pockets.

Whenever I am on the radio over at WDET, for a segment on local music, I emphasize seeking out the “Bandcamp sites” of bands. Bandcamp sites offer users access to an artist’s latest released music, featuring information on the artist, social media links, merchandising links.

If anyone out there is fortunate enough, this week, to be in a position to spare some funds, then remember that Bandcamp will also provide you an option to pay a bit (or a lot) more than the asking price. You can also leave a note if you like— a tip, and some words, are always appreciated.

Here is just a small, small portion of options, when it comes to local artists that you could support. Maybe you’re already a fan of some of the bands we’ve listed? Or, perhaps this is an opportunity for you to discover (and support) your next/new favorite band or artist.

Electric Blanket may have disbanded, but you can still check out their most recent album, from the summer of 2019.

Child Sleep has three albums to choose from and I recently declared ONE of their songs to be among my top 10 favorites of the decade! But I won’t tell you which album it’s on. You’ll have to explore.

Act Casual just released a live album from their Dizgo performance at the Tangent Gallery.

We all need to be wary of the risks of disinformation on the Internet. Disinformants was ahead of the curve in terms of advocating for that…

Loose Koozies are releasing a new album next week, and they’ve got members from Ann Arbor and Ypsi, as well as Detroit.

Let yourself be sublimely carried away by some local shoegaze & dreampop-rock from Slug Love.

EnD is a constantly evolving improvisational journey in Chaos Musick, and you can listen to their live installments, like LIVE 25 recorded at Lo Fi Bar. Find more from EnD with their artist invite series of recordings.

One of my favorite subgenres of all time is Surf Rock, and Virga does it oh so well.

Find the latest from the kaleidoscopic indie/punk/space-rock/alternative smorgasbord of Zzvava.

Truman will bring you transportive space-rock and exhilarating blankets of reverb and distortion mixed with sweet dynamics and smooth vocals.

Skeleton Birds were a band I encountered early while on the Ann Arbor Ypsi-beat, and I’ve been waiting years for this follow-up, which does not disappoint whatsoever. Propulsive indie-rock with meticulous attention to exquisite tones and ambiance.

Honey Monsoon provides music you can meditate to, dance to, heal to, or just be inspired.

Funk ensemble Liquid Thickness has a new album you can find on Spotify, but they also have plenty of live material to download on Bandcamp.

Multi-faceted funk-rock fusion group Chirp put out an album in 2019 that you can download today.

Let False Figures provide you the perfect catharsis by way of minimalist indie-Americana and neo-folk ruminations.

Hip-hop artist Louis Picasso has lots of new music you can find on Spotify, but I’d recommend buying the 2017 album, GOLD— the title track alone is worth the price.

Junglefowl is also a great outlet for catharsis right now— fusing garage-rock and indie-punk with thrashing rhythms and psychedelic guitars.

Human Skull is another band I’ve been following for a while— they just put out a new one! Surfy, rollicking, heavy, rocketing, punchy indie-rock.

Matt Jones wrote what might be my favorite song of the decade! He is working on a new album, but with all that’s going on, we can’t be sure when we’ll hear it. Buy any of his albums in the meantime.

Misty Lyn & the Big Beautiful shares some members with Matt Jones’ group (The Reconstruction), and they are ALSO at work on a new album… Fingers crossed that we can hear it before the year ends. Listen to her first two albums for now…

Minihorse, led by songwriter/producer Ben Collins, released a new album in the mid-summer of last year worth buying.

And then there’s Starling Electric, a group led by Caleb Dillon, with jangly indie-rock and paisley pop soundtrack for these strange days.

Here’s a link to all other Bandcamp sites tagged with ‘Ann Arbor Releases’ https://bandcamp.com/tag/ann-arbor?tab=all_releases