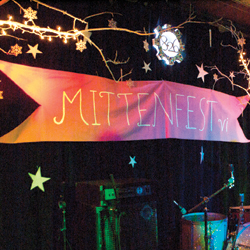 I’ve been fixated on the idea of an Apocalypse Mix.

It’s December and it’s 2012; remember all that noise about the Mayan Calendar running out, promising a global/cosmic jumbling of epic proportions. Plus, print-deadline required I send these words to the page on the morning of the actual Election, so, as we’re reading this back, we now either have a new President or the same guy…or, maybe it’s Florida-2000-all-over-again and we won’t know until Mittenfest?

Is it still worth indulging apocalyptic fervor? Should we say our prayers? Why do I feel compelled to make a music mix? Is that weird? What would that even sound like?

Would it be songs that portend the end, -like punk-ish fare that snarls about world destruction at the hands of corrupt leaders, or folk-ish songs that harangue acquiescence to tyranny; maybe songs that you just want to hear that one last time. Can the right arrangement of songs save you from fire and brimstone?

It’s a dark subject to stew on, surely. But I’m leaning towards two possible track listings themes for my doom-mix. One would be to sift through and find every single song that, sincerely ‘struck-a-chord’ in me… Shook me. Made me cry. Made me feel laughter in my heart or made me feel heroic somehow, somewhere in my life. Think of that, that’s something to remark upon “before we go,” you know? That music had that beautiful power…

But there’s another theme: one to outshine all gloom. Any kind of music-mix-before-the-world-ends, for me, would have to include songs, whether brand new half-finished-ideas or those ol’ tried-and-true tunes, that came from the people, the performers, the artists, that I came to know so well, on a personal level, through their music (and through their personalities off the stage and out on our neighborhood streets).

Mittenfest, then, presents the perfect scenario: If you gotta, go surrounded by your friends and family.

Man, this is getting dark. Can you hear my nervous laughter? Let’s change the tune of this column. Easily done — Mittenfest easily course-corrects from darkness to lightness and that’s mainly due to the commendable efforts of 826 Michigan, the Ann Arbor-based non-profit tutoring/writing center and beneficiary of Mittenfest proceeds.

I write about Mittenfest every year because it brings the music community together, into Woodruff’s adhoc “living room,” to recite crackling rock tunes, folk ballads and even some hip-hop. Nestled around the fireplace, it’s an inspiring 5-day-long-moment of explosive camaraderie. But, let’s not forget, there are dynamic displays of the local talents from our fine indie-music scene.

So I’ll tip my hat to the noble work contributed by enthusiastic tutors and volunteers supplying drop-in tutoring, special events/programming, and “one-on-one” educational engagement speaking directly to “a student’s interests” -poetry to storytelling, songwriting to prepping for college-entrance essays.

The future…That 826 is “education-focused” is Jeremy Peters prime reason for helping organize Mittenfest and contribute to the non-profit by sitting on its Board of Directors. “(826) is helping fortify kids’ futures,” said Peters, who also co-heads Quite Scientific Records. “Helping kids be creative is important; writing is an art form just like music.”

Last year, Mittenfest raised more than $21,000 for 826. This year bodes well, also, as the DTE Energy Foundation awarded 826 a grant towards expanding tutorship into the Detroit area. You can hear more about that at the Festival (New Year’s Eve weekend), while listening to a wide range of new music, new bands, unheard-of-out-of-towners/ as well as your usual local heavyweights.

It’s gonna be a good year; a good future.