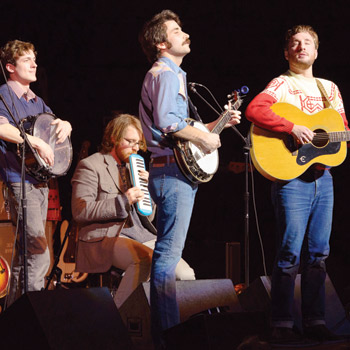 Imagine taking the guitar-based, catchy-pop sound of bands which comprised college-rock radio playlists in the mid-late 90s and charming it with trumpets, melodicas, banjos and warbling saw blades teased with horsehair bows. Milia’s voice is an instrument unto itself, resonating with the beautiful purr of a viola (sung in the reedy Rustbelt-accent typical of southern Michiganders.)

Milia, with David Jones, Zachary Nichols and Ryan Etzcorn released their most ambitious album last February; Eternity of Dimming (Quite Scientific / Loose Music). Their third full-length, a double album, spans 20 songs in 90 minutes. These expansive ballads mimic epic films, explaining their latest uptick of music videos streaming on the band’s website. Current checked in with them after their latest North American tour.

What have you enjoyed most about performing the new stuff?

Milia: We toured as a stripped-down trio – Davey, Zach and myself. It’s been encouraging seeing stronger crowds out west than we’ve ever had out there before. People seem to be really digging the immediacy with which these songs come across —without drums or bass, it’s less of a rock show and more a group experience.

So, talk about pulling off the songs, past and present, as a trio, with some being fairly complex.

The more circuitous, esoteric tunes might not hit as well for the casual fans who’d rather hear “Mona and Emmy.” Same with outdoor festivals where you need sets to carry a momentum that isn’t promised with 8-minute songs in meandering time about  life among the Amish in upstate New York. As the three-piece we got away with playing more of just what we felt like, making it a much more expressive and spontaneous art form.

You debuted the vivid music video for Dimming’s lead single, “Black Holes,” last summer; it effectively mimics the static of old VHS tapes. Videos, or even short films, seem like they are  particularly attractive to you, considering your writing style and approach…

Christine Hucal directed that ( the Black Holes video)  and deserves most of the credit for mining that metaphorical concept. We’ve grown quite enamored with the static, for at least it is the snow of our nostalgic imagination.

So, we sense you could get really into film, maybe as much as you’re already invested in music, with the imagery able to connect ever more viscerally and immediately?

What’s next? What’s the future hold?

Milia: More is always coming. I’m into writing the fifth record now. The deep environmental influence that 90s alternative songs and college-rock tonality had on me growing up is starting to rear its head, more melodic or hooky or immediate…or concise.