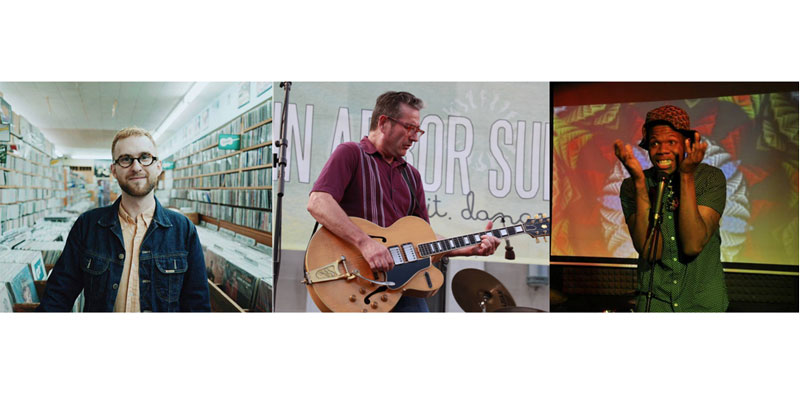 I know I say this every time, but there’s so much happening this week.

First thing’s first: we have an early contender for local album of the year.

Evan Haywood has spent the last nine years surrounded by vinyl records, absorbing them through direct aural flow (headphones) and perhaps through a more metaphysical osmosis. I like to imagine the singer/songwriter/producer/DJ perched at the checkout counter of Encore Records (on Liberty St.) with hundreds of thousands of sheathed wax membranes coolly emanating their essence from the packed shelves surrounding him into his cerebral headspace. Haywood has been making weekly visits to the record store for nigh on 20 years, always walking away with more and more, be it hip-hop, rock, psychedelia, or countless other genres from around the world.

You might also know Haywood as Clavius Crates (from Tree City) or for his work with Man Vs. Indian Man. THIS album, however, has been in the works for more than two years and was released on Monday. Visit the bandcamp and check the stacked list of notable local talents on the production credits, including Fred Thomas, Chris Koltay, Eddie Logix, Heba Kadry and Rishi Daftuar. But let’s also nod to Haywood, who not only designed the album art, but poured out a mesmeric world of wavy psychedelia, hazy sun-bleached folk lullabies and dreamscape curiae onto a baroque-tinged acoustic sway. Or as Haywood puts it, "Kind of a like an orchestral, psychedelic, pop-folk album."

Look for a vinyl release in the near future. evanhaywood.com

Also, Haywood was trying to sync up a show this Saturday with Willa Rae & The Minor Arcana and Nina & The Buffalo Riders, but their original venue fell through. Stay tuned.

While we’re on the subject of recently released local music, Check out King Milo:

“P.K.E.” started streaming last month. Producer Brandon Wiard tipped me toward this Ann Arbor based rapper/lyricist, otherwise known as Shawn Thompson. King Milo has a cool boisterousness about his flow, his samples and beats have a frenetic feel, the bars he raps and the production backing him often geysering into a slick celebration of the independent spirit. If you’re reading this at work with your speakers on, be warned that there’s a healthy handful of swear words dotting these raps, just fyi. And if you’ve got headphones on? Snug ‘em closely and turn the volume up for “Cool Out”

If you’re in Detroit (or up for a quick drive…) then I’d recommend checking out Ann Arbor funk/soul ensemble Third Coast Kings. The group is currently working on their third album and will be valiantly letting off some of that sensational steam by performing new material. The newer, surging soul outfit Inn will be opening things up. Fans of NOMO or Budos Band, take note…

There are gradations of personal crisis that each of us encounter in any given year or any given week of our lives and while our responses and recoveries differ, the emotional impact can be universal. This weekend's reception is for a poignant art show that acknowledges the beauty of that fragility that we all share and that we all feel; no one is invincible, but recuperation is always within reach.

On the road to said recuperation, be it spiritual, mental, physical or emotional, artists are often finding crucial catharsis through creative output. Songs written in the depths of heartbreak, paintings drying in the days after disenchantment, works that subtly reflect that unique pain of brokenness. More than 30 artists will have their work exhibited for NEVER NOT BROKEN, curated and juried by Anna van Shaap. This evening's reception features live music performances from the Autumn Nicole Wetli band (with Shelley Salant and Morgan Cox).

If you’re near Ypsi, consider dinner and some rock music, stop by Bona Sera Restaurant for George Bedard and the Kingpins. The Kingpins, lead by Bedard, often put on a clinic of multifaceted rock genres, spanning scintillating blues jams, sleek surf, raucous garage stompers and toe-tapping pop/rock. Call ahead for dinner reservations (734-340-6335) and then head down to Bona Sera’s Underground for fine live music.

See you next week