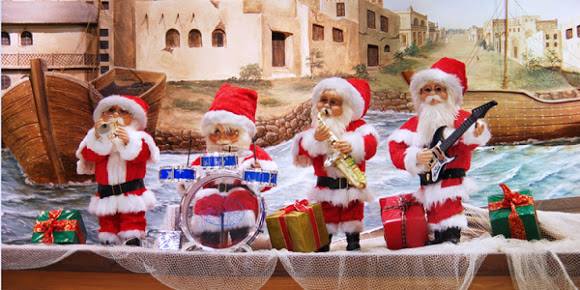 Some husbands have man caves. Christopher Anderson has The Blind Pig. At least, with his wife not being as much of a “music type” as the singer/songwriter (of Vagrant Symphony, along with heading Intellect Records and annually curating the YpsiArboroo Festival), he uses local concerts as some beaus might engage with recliner-lounged Football viewing afternoons.

By viewing certain bands outside of his usual scene/genre (by way of attending shows at the Pig and through his organizing of wide-ranging and excellent YpsiArboroo lineups), he felt inspired to put together a spirited holiday revue that could only further bolster a sense of bridge-building camaraderie.

Anderson arranged a lineup of nine bands for a solid five hours’ worth of musical performances, hosted at a local Co-Op, The Luther House, on Friday night (starting at 8:30 PM).

This injection of good will and peaceful/optimistic-stoking spirit couldn’t come at a better time for Anderson. “I was feeling burned out on music,” said Anderson. “My car had been broken into recently and my guitars were stolen. Things were rough for a bit. But, I still felt that I need to be involved. I like the alternative venues too, so a Co-op show is perfect since it can be free. I've always wanted to have a Christmas show too.”

Anderson is actually linking “the Co-Op scene” with his A Very Luther Christmas concert. Most of the groups on the lineup are essentially delegates from different Co-Op houses around the Ann Arbor area. Wych Elm reps the Vail House Co-Op, Anderson said. “That’s Dan Ackerman's band. I went on a spring tour with him in Pennsylvania. He's an honorary member of my group and a fine banjo player at that!”  PING PoNG, meanwhile, reps The Far House and the Arbor Brewing Company collective. Andara is based from the P Trail House, and Flycatcher is the house band of the Farmhouse. “You know, I actually ended up proposing to my lady at the Farmhouse show for YPSIARBOROO,” said Anderson. “It's a moment I'll never forget! So, yeah..It's a pretty diverse lineup. I really like how it has developed!”

The Sandhill String Band is embracing a Christmas Wonderland theme for their performance, while Anderson’s vast/varying Vagrant Symphony will cover “Rockin’ Around The Christmas Tree” and “…three songs by Bob Dylan about winter.” A White Elephant gift exchange and pizza party are not out of the question… We’ll see. Anderson seems to be past his “burned out” period, in terms of the live music scene. But, he can’t help but feel wistful over the all too painful loss of Woodruff’s. “I feel that the Ypsi scene is hit pretty hard with its absence,” said Anderson.

Christmas is the season of hope. Let’s hope A Very Luther Christmas can stir up some substantial collaborations and camaraderie and gird the good scene for the future ahead, Woodruffs or no-Woodruffs.

This feature on a special Holiday show technically interrupted our heretofore sequential countdown of Favorite Albums Of The Year. Rest assured, there are three more entries to come as Weekly What’s Up looks back at the year in local music, 2014. In the meantime, one Honorary Mention for music releases this year has to be Ann Arbor’s The Landmarks, a sleek blend of indie-pop and post-punk bwo their solid EP Schisms.