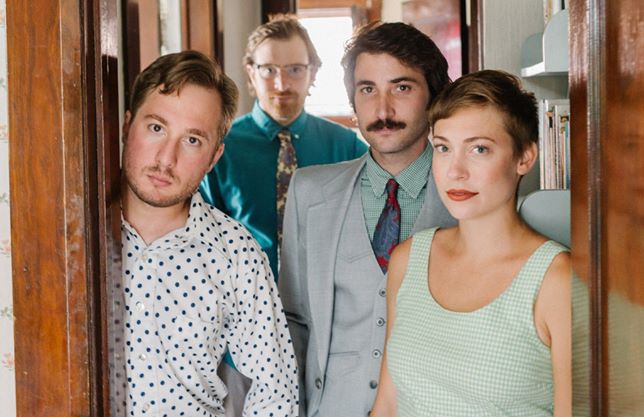 Here’s the thing with Frontier Ruckus:

It’ll be heavy. It’ll be peppy. It’ll be provocative and it will be catchy. And, if you really want to bend your ears in, you can parse all the particular instruments the Ann Arbor-born alt-country rock quartet.. And, if you’re listening closer, still, you’ll fall under the nostalgia spell of the lyricist—evocative, wistful, and full of symbolic imagery.

Now based between Detroit and Ann Arbor, with Mathew Milia on vocals/guitar, David Jones on banjo, Anna Burch on vocals and Zachary Nichols on trumpet, they’re set to wrap up a tour that supports their fourth full length album, Sitcom Afterlife, with a performance at The Loving Touch in Ferndale.

Jones and Milia have been writing music and performing together for well over a decade. Their haunting and heart-swooning debut album The Orion Songbook conjured the specific Frontier Ruckus spirit into a nearly full-formed apparition, over atmospheric organs and prickled banjo, heavy booted bass trudges and cool guitars, with an ever-trilling voice, quavering as though it’s always just about to break and breeze away like birch bark over a Great Lake, gutting itself with vulnerably confessional words of the sweetest poetry mythologizing Midwest coming-of-age themes.

And here we go, with Sitcom Afterlife. Listen:

Milo: How’s the autumn been going for you guys? How did the release show go at the start of the month?

Matthew Milia: To be honest, playing these songs from the new album live is some of the most fun I've had onstage in a really long time. And they were, in a way, intentionally designed with that in mind; I wrote them two years ago when I was in a bit of a dark place. So, somehow the tunes and melodies and song structures that were coming out of me began to work in a sort of antithetical way to the bummed-out lyrics they were supporting. The songs sounded upbeat and classically pop. Poppier than anything I'd written prior. It was like I was allowing myself a sort of escapist vent to feel good vibes within all the grief. Coming up with catchy tunes really gave me something happy to cling to and rattle around in my brain.

Milo: This is your fourth record. I don’t know why, but, to me, that feels like a time when a band has really turned some kind of corner or made their mark, ya know? You’re establishing a canon, at this point, right? Are you getting there, does it feel that way and what’s been the key to keeping you together, keeping you going?

Milia: Four albums in, it definitely feels like we're riding a vehicle a bit more substantial at this point. We have a really diverse catalog to choose from each night when we perform. People who have been following us for a while seem to appreciate the different albums individually and the eras they represent within an overall project. It's very gratifying to have that sort of established mythology at play—everything new that we create enters that world and interacts with pre-existing characters and places in contrasting or complementary ways. And on a personal basis—the fact that we've already been doing this together for so long, as best friends lumped together in cramped spaces in constant locomotion, whether physically on tour or creatively within the music, we've learned a lot about how to keep the thing on the rails. We all respect each other so much and believe in the overall concept of the band so dearly that all that typically wins out over inevitable petty daily grievances, etc.