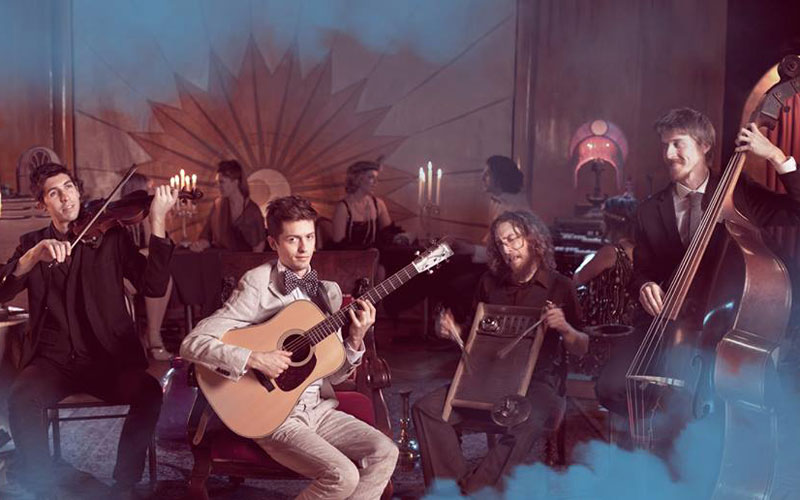 The Appleseed Collective have done a fine job of evading a certain trap. Violinist Brandon Smith calls it “…the Mumford & Sons Trap…”

You think of string-band music and the words old-timey jump to mind; you see gaslights and rotary phones, suspenders, hoopskirts and maybe hootenannies. But when this skilled quartet lug their upright bass, their fiddle, washboard, mandolin and that hotel concierge bell for added rhythmic charm, they might get pegged as some overly traditionalist revival band…or perhaps a Mumford & Sons cover group.

Then they start playing…and that perception gets shredded. You can see this on October 1st at the Ark; it’s the Appleseed Collective’s last show of 2015 and a welcome stop in their hometown before they head back out on the road.

Singer/guitarist Andrew Brown recalls a sound engineer at one venue walking up to them after they’d tuned up; the show was just about to begin. “Welp,” he called out to them. “You guys ready to go someplace else?”

“Yep,” the guys answered, with gusto. Because, you think old-timey, you think Prairie Home Companion, you think folk music…but the Appleseed Collective blow past that revivalist “trap” like an old locomotive, running it right over and maybe taking mere scraps of the old world with them, pushing onward, with a progressive charge.

No, wait, it’s not exactly a locomotive— it’s more like a disruptive twister, a furious funnel cloud that’s kicking up all the unique musical spirits buried from beneath the hay of last night’s barn dance, be it gypsy jazz, string band jams, bluegrass, folk ballads and whatever you wanna call “Americana” and chutes it up and tumbles it around until it acquires a hybrid of all these elements, including a rustle of funk and a twinge of psychedelia.

The band, with Vince Russo (washboard/percussion) and Eric Dawe (upright bass), have steadily won over audiences across the country, having hit the road for tours on a regular basis for nearly four out of their five years of playing together.

“There’s an amalgam of influences, so we are hard to classify. And, we do basically play whatever the heck we want,” admits Brown, who formed the group, initially, with Smith back in early 2010. “Some musicians making this type of music are trying to honor the tradition, trying to get that exact sound and I think that’s cool; I totally respect it and lots of my friends do that— they are super amazing players and I love watching their shows. But, it’s not where my soul is trying to go.”

The direction the band has been going since releasing Young Love (back in January, 2014), is toward a more progressive versatility. Not “prog-rock” per se, or, if you will, “prog-folk…” but, rather, an umbrella genre with its flapped spokes arking down surely and dynamically into several decade’s  of unique types of rootsy folk music, be it the 20’s or the 60’s, and then synchronizing it all into something with an almost pop-like sleekness.

“Some of it moves in the pop direction,” admits Smith, “while some of it moves further out. We’re moving in both directions; we want to write some songs that have some really catchy pop feelings to them but also want to do the really deep stuff that…we might find ourselves asking or daring, ya know…like, do we wanna try this with an audience?”

When asked to sum up the certain mood or vibe that their latest batch of songs is headed toward, Smith answers: “Its like… Frank Zappa and Aretha Franklin meet up with Thom Yorke…and they can’t decide what to get for dinner.”

Exactly. Because, don’t forget, these are 20-somethings who came of age around the cultural cocktail shaker of post-millennial Ann Arbor proper, so whether or not both Smith and Brown grew up in households that instilled a rich reverence for the older world’s music, (from Smith’s revelations of “jazz-violin” styles or Brown’s utilization of his knack for a showman’s theatrical oration) they still are present and influenced by the modern music world’s ever edging wheel of avant-gardist indie-rock styles. So, yes, you’ll get an “amalgam…” Or, if you want an old-timey reference, maybe it’s musical moonshine… without the hangover…and legal subterfuge.

As a background, Brown grew up exposed to a vast amount of music because his father was a Motown session musician. As a toddler, his father would play at the piano as little Brown ran rampant, singing improvised story-songs about his antics. The young songwriter was thus attracted to storytelling styles and found that the alluring aesthetic of speakeasies and piano bars from an older world just seemed to fit his vision and his characters quite well.

Smith, meanwhile, had his fire lit by jazz’s untamable spirit. As a fiddle player, he found classical music to feel “…old and dead…..But with jazz, I can make up crazy solos on the spot and always have something new to try. That communicated to me, that ‘there is freedom for you!’”

There is freedom for The Appleseed Collective. The quartet’s chemistry and tightness as an ensemble has congealed— unbreakably so—after the valiant slog of tours cycled into albums into more tours into new albums…and so on…  Most notable of all is that they’ve found their narrative voice. It changes decades or styles, but it still flows coherently. And, often, theatrically… “I’ve always liked theatrical things and I’ve always liked performance.” said Brown. “I liked the color palette offered from the speakeasies and I liked that as a setting for my stories.”

“And, when I was a kid I was into the idea of magic and I still am. I look for wherever that magic is…There’s something about the 1920’s, there’s magic in that sound, there’s something that pulls you a little deeper and it sounds like some kind of weird mystery that’s waiting for you around the next corner. We’re interested in channeling that and really creating an experience…,” says Brown. It’s like the sound guy we referred to earlier in our story—they’re  taking the audience “…someplace else.”

And that engagement with their audience extends past the stage and theater and into the community. The band has always made a point of propping up the local level business and farms, embracing their community and expressing a friend-level gratitude to their fans that evaporates the line between band/audience. When they tour, they stay with friends or couch surf; they seek out local grocers and peruse farmer’s markets. “And, that’s not only for our own fulfillment, but for our own happiness. It’s so good to stay in touch with friends and meet new people and make friends in places across the country,” said Smith. “We’re actually hoping to roll out a new initiative soon…We’re going to try to partner up with local farms in interesting ways, next year.”

“Right, how can we connect people, the people who come to our shows, to the local farmers who are located around them and try to end the food desert,” said Brown, “and, instead, create a food paradise.”

We should add Pete Seeger to their long list of influences; only this time, not just musically, but socially, consciously, morally… “We realized we should try to do something about the state of the world,” Smith said, anxious over how grandiose that might sound. “That’s not any Jesus complex,” he quickly says, “I just honestly feel like we could be doing a lot more and trying to really connect with people.”

They must have gotten that sensibility from Ann Arbor, I think.

“Yeah, that’s one of the beautiful things about the Ann Arbor community,” Smith says, recalling the invigorating experience of recording their most recent album, Live at the Ark, “…the folks that have found us, stayed with us over these years— they are just really loving humans. We feel very supported by the Ann Arbor community.”

So, back to the next batch of songs. “A speakeasy opera,” Brown offers. “It takes you through the territories of old time jazz, a little bit farther out to funk and soul and minor-folk ballads, too. I wish you could hear some of it. But, you’re the writer; you’ll be able to articulate it better when it comes…”