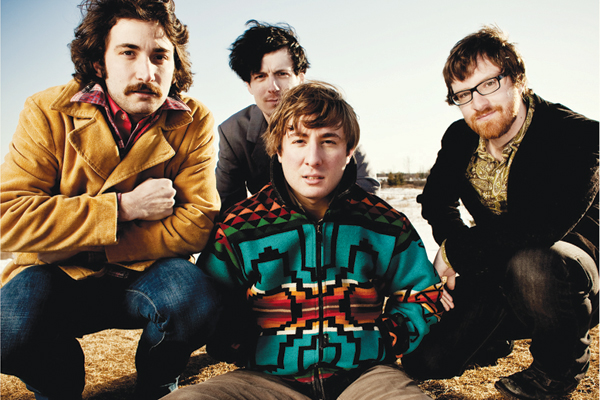 Singer/songwriter Matthew Milia had no reservations making something epic, monumental, or even oceanic, in scope; an album from which “thoughtful and patient listeners” could “encounter a really rich experience” that they could return to “frequently and interact with in new ways each time.”

Twenty songs, a double album, an auditory odyssey afforded “the same sort of literary opportunities and devices granted to a large novel.”

It’s possible. And, for all those who’ve appreciated this mid-Michigan-based quintet’s elegant brew of poetic bluegrass, their dizzyingly augmented poignant tracts charted and painted out in mesmeric splatters wringing like lucid dreams – there are few other local bands that we patient listeners would so enthusiastically encourage to, yes, go big if you want, go bigger even, bigger still,…than even before.

Those acquainted with Milia’s dense evocative lyrics know that memory is his muse – “I like to let the outrageous embrace of infinite lingual combination and experiential situation be my style….”

These jangling, tumbling sonnets are singed with the vibrant shadows of subtly significant signposts of life, diaries dotted and strung together by the quiet profundities of a beautiful bleakness, a blur of days and surreal nights through emptied back roads untouched by the noisy bluster of city centers.

By simply listening to the earliest works of this group (Way Up State EPs), it is evident that they’re much more than a folk-rock group – they toe both shores of rock and folk, and are able to charismatically clang out their tinny banjos, soaring brass and warbled melodicas so naturally. And this forthcoming album’s songs, distinguished this time by “lots of 80’s Casios, echoey-amps, electric guitars and poignantly-wacky 90’s nostalgia” were given an “unbelievable depth and texture” by each bandmate, Milia said.

The members of Frontier Ruckus have recently wrapped up their third full length and Milia has used words such as “enormous,” “diverse,” and “a maximized and exaggerated sanctification of the minutia of all past experience,” to describe it.

It was the perfect inspirational storm, first, for the band to be at such a point of strong rapport, honed through years of touring, then coupled with Milia feeling so strongly about “all” of these songs that each had to be included.

Brevity and minimalism, Milia said, can be overrated, and fun is fine, but it has its place. “With writing I aim for the miraculous connections and interactions that can develop with metaphor, pastiche, subtle association, prolepsis and complication. Complex records deserve to be made and explored…”

As April sets on, Milia looks back upon an unusual winter, spent in Ann Arbor, writing and recording. Thawing has, he says, always been a frequent “elemental activity” in his lyrics. But this year was unseasonably mild “to the point of being worrisome.” When moments of true cold struck, it made “breathing in the cold” feel “meditative.”

Milia “feels environmentally sensitive to the freshness of seasons changing” and, of course, the memories they trigger.