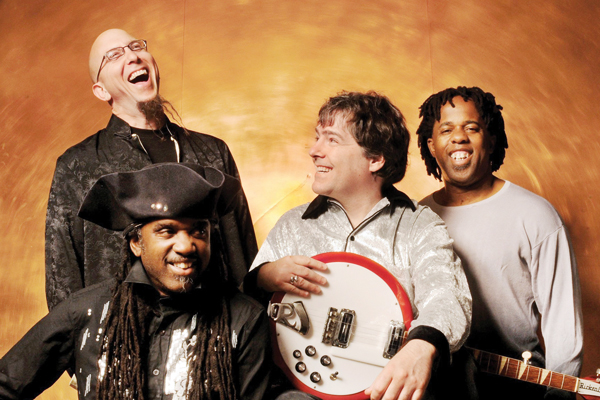 Bela Fleck brings a whole new meaning to the word virtuoso; no doubt he meets the qualifying factor with outstanding technical skill, but through a storied career, he has risen above being a raw talent,
changing the rules of bluegrass — a couple of times, actually.

As part of Newgrass Revival he helped shape the evolution of the genre, but Bela Fleck & the Flecktones — who play the Michigan Theater on Thursday, April 19 — shattered all the barriers, building a completely innovative force of indefinable hillbilly psychedelia that veers into jazz, blues, bluegrass and folk. The beautiful thing is, all four original members — Bela, Victor Wooten, Jeff Coffin and Futureman — are once again together. If you're a fan, see them — with all the side projects these guys are involved in, who knows when they will be this close again. Tickets are $29.50, $39.50 and $65.

Give me some sugar

Two fast-rising sugary folk-rock bands — Good Old War and The Belle Brigade — bring their full sound and sunny warmth to The Ark on Tuesday, April 17. Good Old War, a trio from Philadelphia, matches uplifting musicianship with melancholy songwriting, rounded out with some of the sharpest  harmonies out there. The Belle Brigade, a brother and sister duo, shell out poppy folk with a jaded edge. Their 2011 self-titled album was one of the brightest of the year and their cover of Bob Dylan’s “No Time To Think” was one of the best off the sub-par compilation album, Chimes of Freedom: The Songs of Bob Dylan. Tickets are $17.

A shining member of purist-folk’s most famous family, Peggy Seeger (a half-sister of Pete) continues to revitalize traditional folk, feeding yet another generation classic songs filled with still-relevant problems. A long-time activist, Seeger — who plays at The Ark on Thursday, April 5 — scorches through songs about rights for workers, women and the down and out. She’s clever, satirical, poignant and unafraid — definite reasons she is always ahead of her time. Tickets are $15.