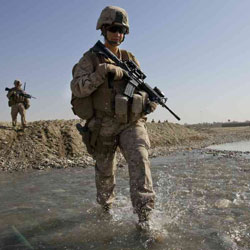 Been there done that

It really took this long for the Pentagon to lift the ban that prohibits women from serving in combat roles? It's not like women haven't seen combat —according to USA Today, 152 female troops have died while deployed in Afghanistan and Iraq — they just haven't had equal opportunity or been given the deserved credit. And when the Defense Secretary officially announces the news today, many female soldiers may think, "been there, done that."

A slap of truth

Leave it to Vice. In this weird time to go to high school — every embarrassing screw up might be caught on video or photographed and thrown onto Facebook, Twitter or a blog — they provide an insightful, edgy and honest guide to protecting yourself. You don't want to hear it from your mom, so let Vice break it down for you. And even if you're not in high school, this is an interesting read about the twisted state of teenage cyber bullying.

Calm the f*ck down

We've all been there: someone around you at a concert is acting like a tool, whether they are shouting at the band or puking on your shoes. Last summer when someone yelled "Summer of 69" at Ryan Adams I thought he was going to have a meltdown. Luckily he didn't. Rolling Stone breaks down the ten most obnoxious  behaviors at a show.