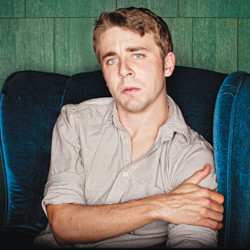 Recently Joe Pug was going through a lyrical dry-spell. For the better part of a year, since around the time he finished his latest album, The Great Despiser, he couldn’t write a song without scrapping it. But the 20-something folkie armed with blue-collar sensibilities and a poetic articulateness wasn’t really worried about it; he would just have to be prepared when the creative flood gates once again lifted. And a couple of weeks ago they did. 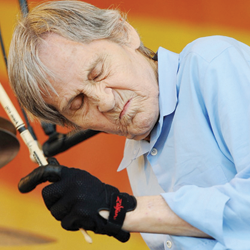 Ode to Levon
Joe Pug opened up for the late Levon Helm at one of his final shows, that took place in Ann Arbor at the Michigan Theater. He filled Current in on that experience: “When he stepped onstage — and I think in the late stages of his life he was in a fair amount of physical pain —it seemed like it all melted away from him and he was this lightbeam with happiness emanating from him. It was like watching Buddha being on the drumkit or something, man. You hope you can feel a small bit of the contentment that he seemed to feel at the shows.”

Really everything in his short and successful career — from recording his first, highly-praised EP of scrappy solo work, 2008’s The Nation of Heat, to opening for the late, masterful drummer of The Band and dynamic Americana musician, Levon Helm — has been a juxtaposition to this clear-eyed perspective. And living by that work-in-the-moment, don’t-fret about-the-future paradigm has been treating him pretty damn well.

Call it what you will

College wasn’t for him. He left before his senior year, moving from North Carolina to Chicago. (“I didn’t know it was the right move; I just knew the wrong move was staying where I was.”) He picked up a construction job and started plucking around on a guitar he hadn’t picked up for years. Before long he was playing open mics. Then there was a stroke of luck: he befriended a studio engineer that liked his sound and allowed him to use recording slots when other musicians cancelled at the last minute. These accidently became the Nation of Heat Sessions.

“We didn’t even know we were making an album at the time; we just had nothing better to do,” say Pug. “I had some songs and he had some studio time,” says Pug. “At a point I realized I liked more songs than I didn’t like. That was the tipping point”

Obviously, just like almost any celebrated underground album, it took a while to take off. He gave it away for a long time, but he did it a little bit differently: He mailed it, paying for the postage, to anyone who was interested — even sending multiple copies for friends.

“Now it’s absolutely standard that if you’re an independent band, trying to break in, you have to give your music away — that’s just sort of the deal,” he says. “But, five years ago, it wasn’t exactly reinventing the wheel or anything, but it was at the start of that curve and I feel like we caught it at the right time.”

Ever since then its been rapid-fire releases and non-stop touring. There was another solo EP, In The Meantime, then he made the edgy, now-almost-expected move in the acoustic-roots world: He formed a band and went electric.

“It’s a different world,” he says. “There was a time a couple years ago when I went through some pretty difficult  growing pains getting used to it, but I’m playing with this small group right now and when we go on the road, we’re really tuned in.”

2010’s Messenger showed glimpses of it, but it wasn’t until Great Despiser that the full band was truly let loose. And while the Nation of Heat seemed to be about a country — and its values — circulating back to the same old destructive ideas, Despiser appeared to follow a redemptive journey of how a good heart can specialize in bad decisions. But Pug claims no body of his work is conceptual.

“I wish I could give myself the credit of some master plan or a premeditated direction, but my plan is just to sit down and write the best songs that I can,” he says. “But I feel that if you’re pretty in touch with yourself and your writing, if you have a natural process of getting things out from deep within, they are sort of naturally going to be about the same themes. It’s a part of the story — your own narrative — that you’re living at that point of your life.”