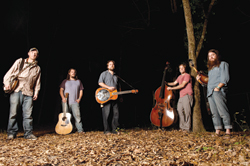 In Denver last Halloween, at a pre-party for the Motet show, about a block from where, at the same time, Occupiers were breathing tear gas and meeting billy clubs, I was more surprised by a different hot topic than the police’s egregious brutality. While half the room was going to Motet’s wildly popular, yearly funked-out cover show bash (they were the Grateful Dead that night), the others instead were opting —and were super pumped  — to see Michigan’s Greensky Bluegrass. At this point it comes as no surprise that Americana bands from the mitt have as much of a place as anyone in the national roots revival, but, at the time, I didn’t realize how wide their following had become, or, for that matter, how big they’ve become. And, even though I in no way was responsible for their success, I rode a wave of silent pride that night because they came from my region of the country. A year later I caught up with mandolin player Paul Hoffman as he and the crew were coincidently rolling into Denver (maybe not; those people love bluegrass) to talk about pivotal moments in the last decade, influences their fans might not expect and jamming out some Prince.

In the last decade your band went from respected local band to nationally recognized touring force. What do you consider the most important pivotal moment?

Winning the 2006 Telluride Bluegrass Festival’s Band Contest. It kind of boils down to how the music scene is working now and how music festivals are becoming so popular; they have this advantage to break a band or grant exposure in a way that clubs and media can’t. [That] led into playing other festivals and we were sort of able to get that recognition and exposure that sort of thrust us forward, gave us the courage needed, I suppose.

You guys have traditional bluegrass sensibilities, but a really unique way of mixing in other genres and making a sound all your own. Is that planned or does it just come out that way?

I think it just comes out that way. Once we started to learn how to play it straight ahead, we just started figuring out how we like to play it and one thing lead to another. Obviously, our covers and jams are pretty far away from that, but if you listen to our original material, I think there is this really interesting blend of the kind of music we listen to and like.

Does the different musical backgrounds of the band members reflect that?

In a general sense, I think it does, just ‘cause we have a rock n roll style to the way we approach bluegrass. Specifically, we listen to so many different things, that’s the way it comes out — a broad array of influences, borrowing techniques that are typical of other genres to create some interesting fusion.

Who is someone that influences Greensky that your fans might not necessarily expect?

I remember this really specific influence I had, for an arrangement for a tune, when I was listening to The Slip [Boston indie band] — their album Eisenhower, which I really like a lot. It’s just the way that they arranged the song that really appealed to me and I applied it to something I was working on. It’s hard to draw a direct line, for me, between what I listen to and what I write: I think there is this broader sense of keying into what’s happening. Why does something so simple work so well? And I bring those broader concepts to music.

You mentioned your covers. You guys jam out Prince’s “When Doves Cry.” How difficult is the rearranging process for something like that and does it make you into a better musician?

It’s something we have always liked doing. I think we started with “When Doves Cry.” I remember learning that and stressing to the other guys that we play that a long time ago, when we started in a basement. We played it at an open mic and we still play it. The trick to it is not just turning it into a bluegrass song; it’s figuring out what makes the song work. We play “Beat It” by Michael Jackson and we bluegrassed that song as well. We learned the way the song goes first and we felt it doesn’t have enough power, so we added some bluegrass and still were able to convey what people like about the song. Usually we try to learn those songs the way that they are, rather than just turning it into bluegrass and taking the easy way out.