Not all souls who wander are lost 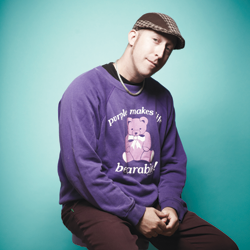 If you don't believe real life is stranger than fiction, just have a chat with Davy Rothbart. After starting Found Magazine — a yearly publication supplied with content by people who send in love letters, hate notes, shopping lists or other sidewalk literature — in his basement ten years ago, he's traveled the world, creating a wildly eclectic social network along the way, giving rides to hitch-hikers, taking liquor shots with NBA superstars and even finding a dead man in a pool. Which, by the way, was in Ann Arbor. (Davy looks at the story with his trademark optimism, feeling grateful to be able to chronicle a gritty pocket in his hometown he can't help but feel pride for: "It always feels good to write about the place you're from.") But, from the why-would-you-write-that embarrassing to the heartwarming tales, the thing that makes Davy such a special author is his honesty. Pick up his new book, My Heart is an Idiot, and you'll find a man who is capable of giving in to hedonism and going out of his way to help someone in a matter of minutes. It's fantastic. Before the Found tour van swings into Ann Arbor to celebrate the mag’s ten-year anniversary Current caught up with Rothbart to talk about sharing his darkest stories, taking a runaway teen hitch-hiker to San Francisco only later to find he turned into a popular DJ as well as making a literary con-man drink his piss.

The book, My Heart is an Idiot, dives even deeper into your personal life than the movie — the good, the bad, the ugly. How have you become so comfortable sharing your deepest stories?

I love reading really personal literature, the sort where people really open up and reveal themselves in powerful ways. I guess, since that's my favorite stuff to read, it makes me feel like wanting to take a shot at doing the same. And then, of course, I've been publishing people's most private thoughts in Found Magazine for the last ten years. The notes are so broad and personal, it felt only fair to open myself up in the same way — put it all out on the line.

One story that struck me was when you shared finding a dead guy in a pool at the home of a girl where you were cheating on your then-girlfriend. You fled, so no one would know you were there — not even the police. How did you have the guts to write about that?

I had a lot of talks with the legal department at the publishing company. With this one, they were like, 'This was a criminal investigation, are you sure youwant to publish that.' I did, ultimately, because it was found to be an accidental drowning. I felt like there's not a great risk of anyone trying to come back and press charges. And, also, as a small loophole for myself, I put a disclaimer at the beginning saying that some of these stories may be fictionalized. So, if it came down to it, I could say, 'It was fiction.'

You also made a guy who was duping over aspiring authors drink your piss. [Davy went to one of his contests, couldn’t find him, ran into him at a hotel bar and later that night made the guy drink urine under the threat of beating him up.] Did you ever hear from him or about him again?

I looked him up recently, to see, and I was disappointed to find he is running those shady literary contests again. I will say this — this is what I took from it. I think I got through to him that day. Some shift happened. Even if it meant he cared a little more. If he's putting more care into the contests and trying to make them more legit, more genuine, then I'm cool with it.

While you were writing it, which story did you have the most fun revisiting?

I really enjoyed most of them. Some were painful memories, but even though there were humiliating moments in my own life, I feel like…I think it was the director Al Brooks, who said, "Tragedy plus time equals comedy." Which is true. Most of these have happened a few years ago or earlier, so the sharp, painful part of the memory has subsided; so now I can really see the humor and hilarity in some of these situations. Probing into the direct moments of your own past is at times uncomfortable.

There were a few that were pretty meaningful for me to think back about. One that I just expectedly really grew fond about and felt good about was "Canada or Bust". That kid, Hakim, that I picked up and took to San Francisco. Part of that, for me, he has remained a guy in my life. We talk every few months. He's doing really well now. I actually just saw him on tour in New York City. I didn't know he would be there, I thought he was still down in Miami, but we got to hang out. On this tour I keep running into characters — and when I say "characters" it's in quotes, because they're real people. It's fun to see the book come to life over the course of this 79 city tour.

Who else from the book have you run into?

Anna from "Ain't that America." She lives in London still, but she was in New York and she came and hung out at our show. It was fun. She came to this party for the book release and my editor, Shawn, was there and I got to introduce him to Anna and Hakim. It was fun for him, I think, because these characters were coming to life.

One of the craziest parts of the book is when you serendipitously run into Hakim on a beach on Hawaii.

Yeah! That's how I felt when I ran into him in New York because I had no idea he was going to be there. He showed up with his mom, who I had never met.  They hadn't seen each other in five years and that was her birthday, so I got to meet her. I apologized to her. In the story, I don't necessarily present her in the best light, but she said she thought it was honest; she had been going through some tough things at
the time.

And the first story is about my mom and the tricks me and my brothers used to play on her. She happened to be in Seattle. So, I read that story and she got up afterward and gave her point of view. And little things like these morning TV shows [the subject of one of the stories]. I've continued to do those. It's just so funny how far my accomplishments have brought me when I get to, like yesterday morning in Portland, Oregon, I got to sleep in the van for a couple hours, do the morning TV talk show and the other guest they had on with my was the World's Fattest Dog. [laughter] I was like, 'That's awesome, I've made it now.'

Since the release of the book, has anything happened that you plan to write about?

You know…yeah. This tour has been a real rush of interesting experiences. I love that experiences accumulate so quickly. When you're going to a different city every day, when you're seeing friends, old friends, and you get to connect with them briefly — it's really special. And I'm interested in writing a book or doing a film about somebody on tour. I've thought about making a movie about a musician who is on the road again and who is going through a wide variety of experiences — maybe it'll be a book.

We've touched on the grungy characters and success stories, but in terms of the stories in which you're fallen for girls too quickly, has revisiting those memories made you less susceptible to that?

I would like to think so, but I can't say completely, so I don't know, I mean, maybe its something you can't turn off. It still happens, but maybe I've gained some perspective. I'm able to recognize those urgent feelings aren't ones I'm able to keep at bay, but at the same time it doesn't mean I have to act on them.

What has been the most gratifying aspect of running Found for a decade?

I'm endlessly fascinated with the people we share the world with. And getting these deep, powerful looks at so many different people's lives through their to-do lists and journal entires has just been this incredibly profound lesson in life for what it means to be human.