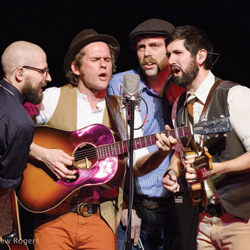 As I reflect on my personal experiences with music festivals, one thing remains constant: the band that blindsides me with a shockwave of sonic cleverness usually sticks out more than the highly anticipated headliner.The annual  Ann Arbor Folk Festival continues that pattern. It’s systematic. Every year a band that I’ve never heard of blows me away. Two years ago it was the Spring Standards, last year it was Elephant Revival. And the rad thing is, those up-and-coming acts that play at the AAFF usually come back to the Ark in the next few months. Here is who I am the most excited to see again:

The Steel Wheels
Saturday, March 23
After the festival concluded with The Head and The Heart delivering a powerhouse set, the couple next to us for a post-fest meal at Tios could only talk about The Steel Wheels. It’s not hard to see why: the old-timey arrangements, effortless harmonies and careful country hooks deliver organic, unforced Americana that lyrically walks on the edge of life and death. Hailing from the Blue Ridge Mountains, the Virginia-based four-piece is certainly a curveball in a thick roots revival scene. $15. 8pm.

Frontier Ruckus
Friday, April 5
Some up-and-coming bands make a great album, grab some national coverage and fade back into  the sea of mid-level hopefuls. Not Frontier Ruckus. Every release from these indiegrass cult heroes — who have been championed by Rolling Stone and Paste — is a clear step forward, with their stream-of-consciousness lyrics becoming more poignant and the band further clicking on an instrumental level. And they like to do quirky little side projects, like shoot videos of themselves on the U of M campus playing Legend of Zelda theme songs, which gives them some nerd cred as well. $16. 8pm.

Brown Bird
Friday, April 12
In contemporary folk we often see bands borrow, splice and forge various sub-genres, but this duo, with their wildly unpredictable tempos, rhythms and layers, don’t seem to try to fit in anywhere. David Lamb and Morgan Eve Swain are their own musical spectrum, veering from the rich history of the stripped-down bluesy singer-songwriter to a whirlwind of foot-stomping Americana that you’ll find it hard to believe only comes from two people. $15. 8pm.

Brother Joscephus and the Love Revolution
Saturday, April 20
It’s either highly appropriate or insanely serendipitous that Brother Joscephus and the Love Revolution are booked on 4/20. Mixing 60s feel-good pop rock hooks with the soul-soaked jazz grooves of the Bayou, Joscephus — a character from Brooklyn who seems to be trying to emulate a hypothetical nephew of Dr. John’s who is perpetually stoned  — and his energetic band of merry misfits, are always ready to throw down some good-time tunes. They’re a bucket of fun and there’s no one else
doing what they do. $20. 8pm.