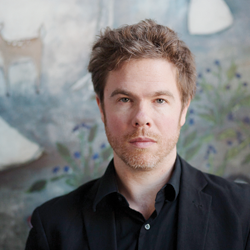 Breakup albums are generally brutal, packed with razor-sharp attacks and introspective self-loathing. But Josh Ritter’s recently released album, The Beast in its Tracks, walks a different line: he trades that usual dose of scorn for a clear-eyed assessment of where he was, where he’s going and the ball of emotions that come with heartache. Beast — his seventh full-length — is the first from the Idaho native since the 2011 split from his wife, fellow folk musician Dawn Landes, and it carries a powerhouse — and eerily relatable — lead single. “New Lover” is an evocative daydream of a man who is allowing a woman to heal his lovesickness, but is still curious about whether or not his ex is seeing someone. It’s poignant, level-headed and it couldn’t have been easy to write. Maybe it’s a new flame, maybe it’s the 36-year-old songwriters maturity, but, according to him, the new material basically wrote itself.

“The writing, in a weird way, was sort of a release,” he says. “Not because it was cathartic or anything like that, but because you actually get a good look at how you are on your own — how your own heart works. Sometimes there are these cross streams of pure emotion, which are not all  good or bad. They are just what they really are, whether that’s rage or happiness.”

And that’s how it’s been his entire career: a matter of finding who he is at the present time, rather than trying to force a certain feel, or produce a manufactured sound. The key for Ritter is being himself.

“Each record that I’ve made has been a collection of songs that represent that period of my life,” Ritter says. “So I feel that I try to keep pace with how each album should be made and how each song should be presented, so I’m forced to stay myself.”

In 1995, Josh Ritter enrolled into Ohio’s politically conscious Oberlin College. He went to study neuroscience, but soon switched to a self-created major: “American History Through Narrative Folk Music.” Following college, he pursued his dreams of becoming a troubadour, moving to the East Coast, working odd jobs and playing open mics. And then he got his break: One night he was playing an open mic in Boston, when Glen Hansard, from the Irish folk-rock band The Frames, walked in. After hearing a few of Ritter’s songs and chatting with him a bit, Hansard invited him to follow The Frames back to Ireland and open for the rest of their tour.
“He was playing down the street and he came in for a beer,” Ritter says. “I was playing an open mic for 20 people — maybe. Then, all of a sudden, I went to playing for 200 to 400 people a night. I had never been in front of an audience like that: a bunch of Irish people screaming at me. It was really, really fun.”

Recently, Josh Ritter has also indulged — and succeeded — in another creative outlet: writing a novel. In 2011, he released his first book, Bright’s Passage, about a recently widowed World War I veteran and his young son as they escape a forest fire and in-laws. Although the book received warm praise — including some from Stephen King — he learned the audience response time comparatively between writing a song and a book is very different.

“It’s learning how to perform at a slower speed,” Ritter says. “When you write a song, then play it to an audience, you can do it so quickly and get the feedback. With a novel, you have a much longer timeframe. When you’re writing, you don’t see anyone reacting during that time.”

Right now, Ritter is in the formative stages of a new novel. He’s not sure what it’s going to be about, but from the very few details he is currently able to disclose, it seems like he’s aiming to move on from heartache.